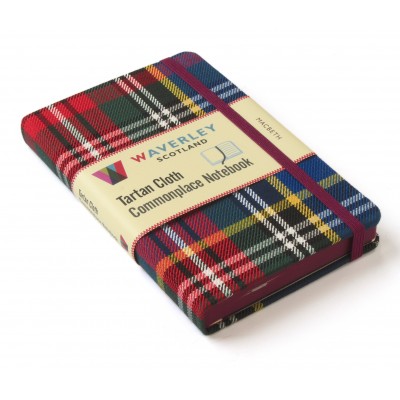 The MacBeth tartan is a very colourful balance of reds, blues and greens with white and yellow highlights.

Most of us are familiar with the name MacBeth, or Macbeth, through Shakespeare’s play of that name. In Scottish history it is said that King Macbeth, Mac Bethad mac Findláich (c.1005–57) was the grandson of King Malcolm II, and his wife (Gruoch) was the granddaughter of King Kenneth III. The real king bore little resemblance to Shakespeare’s creation, though he did kill the ruling king, Duncan I, in battle, and he was killed by Malcolm Canmore (later Malcolm III) in 1056.

But, surprisingly, the surname MacBeth is not related to him. The surname has the look of a patronymic name (“son of ...”) but it is not. Mac Bethad (or, in modern Gaelic, MacBheatha), means “son of life”. The surname MacBeth is associated with a family of hereditary physicians, thought to have originated in Ireland, who practised medicine for the Lords of the Isles. They were employed by every Scottish monarch between Robert I (d. 1329) and Charles I (d. 1649). Some changed their name to Beaton. Some migrated to the west coast and Mull. Others went to Inverness, Sutherland, Easter Ross and Moray. The MacBeths/Beatons are sometimes called the “Beaton Medical Kindred”, and they are listed as a sept of the clans MacBean and Maclean. The MacBeth tartan in which this notebook is bound is based on the Royal Stewart sett.

There is another Beaton family, with an ancestral line originating in Fife and Angus, but their name is derived from the French placename Béthune. They are not related to the Irish MacBeth/Beatons but, confusingly, they also practised medicine. The Bethunes have their own crest and tartan (designed in 1997 by Phil Smith) but they are listed as a sept of clans MacLeod and MacDonald.

About the notebook: This notebook is made with cloth woven in mills in the United Kingdom. Notebook pages and paper components are made with 80 gsm acid-free paper from sustainable forests. Boards used in the binding process are made of 100% recycled paper. This hardback notebook is bound in genuine British tartan cloth with an elastic closure, ribbon market, eight perforated end leaves and expandable inner note holder. It contains a removable booklet about the history of clan tartans, and a bookmark that gives information on the MacBeth tartan.