Home|Waverley Scotland - Tartan Notebooks and Journals from Scotland|Just what is a 'Commonplace' notebook then?

Waverley Scotland - Tartan Notebooks and Journals from Scotland | Just what is a 'Commonplace' notebook then?

Waverley Scotland, an independent publishing company based in Glasgow, has created a range of Tartan Commonplace Notebooks, bound in genuine tartan cloth. The tartan cloth is supplied by and produced with the authority of Kinloch Anderson Scotland, holders of Royal Warrants of Appointment as Tailors and Kiltmakers to HM The Queen, HRH The Duke of Edinburgh and HRH The Prince of Wales. Kinloch Anderson Scotland were established in 1868 and still operate today as tailors and kiltmakers, specialists in tartan and highland dress, and are based in Leith, Edinburgh.

Three years ago, in our detailed research on a book called 'Robert Burns in Edinburgh', we realised how widespread the use of the 'Commonplace' notebook had been. Robert Burns used one; many in the Enlightenment period used commonplace notebooks.
Commonplace books (or commonplaces) were a way to compile and accumulate knowledge, thoughts and ideas into books, filled with items of every kind: quotes, letters, poems, anecdotes, sketches, tables of weights and measures, medical recipes, proverbs, prayers, and legal formulas. They were used by readers, writers, students, and scholars as an aid for remembering useful concepts or facts they had learned.

By the 17th century, commonplacing was formally taught to university students. By the early eighteenth century commonplace books had become information and management devices .

They were used by many thinkers and scientists of the Scottish Enlightenment, such as Frances Hutcheson, David Hume, Adam Smith, Dugald Stewart, Thomas Reid, Adam Ferguson, John Playfair, Joseph Black and James Hutton.

Today, despite the developments of electronic and digital management recording systems, the demand for high quality notebooks remains. Especially when you have forgotten your charger. Over the years Waverley has researched and published many aspects of Scottish history, and historical figures, and we are passionate about Scottish heritage and tartan.

And if you wish to see one of Robert Burns' commonplace notebooks, there is one proudly on display at the Robert Burns Birthplace Museum, Alloway. 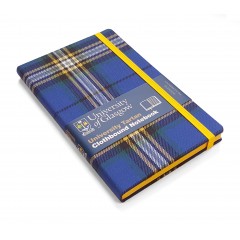 Your brand here? Give a gorgeous notebook with styleOur price: £0.00ViewFor companies looking to make an impact, our notebooks and journals are a memorable way of personalising a lasting gift that is useful, appreciated and different.