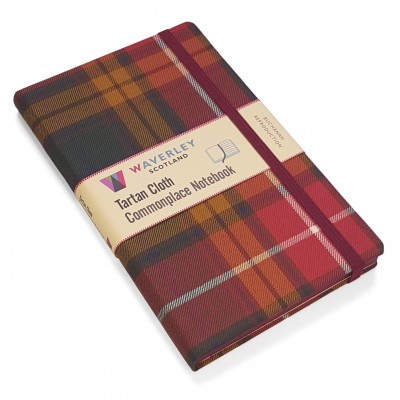 The Buchanan Reproduction tartan has a warm palette of reds, browns, golds and greens.

It is claimed by the Clan Buchanan that it can trace its line back to a son of one of the kings of Ulster, Anselan O Kyan. He came to Argyll in 1016. He fought for King Malcolm II against the Danes and, as a reward, was given the lands of Buchanan, to the east of Loch Lomond near Killearn in Stirlingshire. Two Gaelic names are given as the root of the placename Buchanan, Mac a Chanonaich ("the son of the canon") and Buth Chanain (meaning "house or seat of the canon").

In 1225 another Anselan, recorded as Absalom of Buchanan, was granted lands in Buchanan by Maldouen, Earl of Lennox (d. 1250).And in 1231, King Alexander II (1214-49) made a charter awarding other lands in Buchanan to Gilbert. Gilbert was Seneschal of the Earl of Lennox. 'Seneschal' means an administrative officer in the houses of important nobles. The Buchanans supports King Robert the Bruce during the Wars of Independence. They fought at the battles of Flodden, Pinkie and Langside. The clan prospered in the time of David II in the 14th century. However, towards the end of the 17th century the house and lands of Buchanan were sold to the Marquess of Montrose, Chief of Clan Graham.

Reproduction tartans are also sometimes called “weathered” or “muted”.The tartan itself is identical to the tartan of that clan name, but the colors are “muted”. The tartans have been reproduced to match pieces of cloth that were found in homesteads and battlefields. Those tartans were worn and weathered by exposure to the Scottish climate.

Waverley Books has published two books about Kinloch Anderson A Scottish Tradition and Tailored For Scotland.

About the notebook: This notebook is made with cloth woven in mills in the United Kingdom. Notebook pages and paper components are made with 80 gsm acid-free paper from sustainable forests. Boards used in the binding process are made of 100% recycled paper. This hardback notebook is bound in genuine British tartan cloth with an elastic closure, ribbon market, eight perforated end leaves and expandable inner note holder. It contains a removable booklet about the history of clan tartans, and a bookmark that gives information on the Buchanan Reproduction tartan.