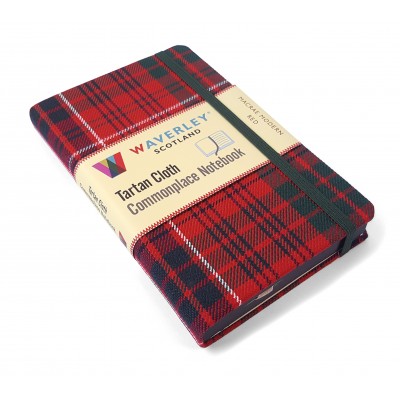 Eilean Donan Castle is at Kyle of Lochalsh, on the road to Skye. It was destroyed in 1719 by three Royal Navy ships and 27 barrels of gunpowder. The ships were sent to attack Spanish soldiers occupying the castle and supporting the Jacobite cause. The Navy captured the castle and bombarded it until it was destroyed.

The notebook: This notebook is made with cloth woven in mills in the United Kingdom. Notebook pages and paper components are made with acid-free paper from sustainable forests. Boards used in the binding process are made of 100% recycled paper. This hardback notebook is bound in genuine British tartan cloth with an elastic closure, ribbon market, eight perforated end leaves and expandable inner note holder. It contains a removable booklet about the history of clan tartans, and a bookmark that gives information on the Macrae Modern Red tartan.