Home|Children's|This is Birmingham: A glimpse of the city’s secret treasures

This is Birmingham: A glimpse of the city’s secret treasures 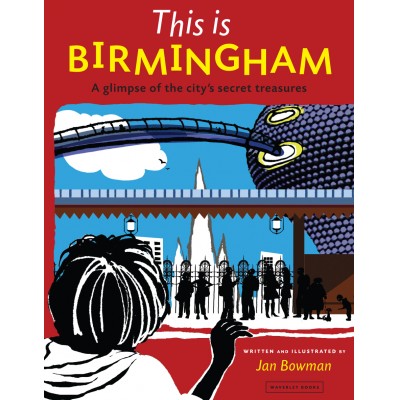 This is Birmingham presents a celebratory, illustrated history of Birmingham, UK, that explains – in verse – how Birmingham became the vibrant, diverse and interesting city that it is today.

Supported by colourful, lively illustrations, the text brings the city’s history to life. A glossary at the end gives more information on the people and places mentioned in this unique history. A map is also included. Aimed at ages 8+, schools and adults, this book is an ideal gift as well as an educational and fun way to learn about local history.

Jan Bowman trained as an architect and now draws pictures for a living. Her work celebrates the best of 21st-century civilization. Originally from Scotland via Canada, Jan lived in Birmingham for many years, and now lives in London.

In the 18th century, Birmingham and Britain were very different from the places we see and know today. In those days our cities did not exist, there were far fewer people and there were no machines. Then, quite suddenly, in a burst of ideas and energy, a massive change began that we call the Enlightenment. Machines were invented and a period of great inspiration and ingenuity led to the Industrial Revolution. Birmingham was key to Britain’s Enlightenment.

A group of people known as the Lunaticks met in the city regularly to discuss ideas: how to end slavery; how to put light into the city; how to cure diseases; how to help James Watt fund his steam engine. Without the Lunaticks, Britain might never have become a great industrial nation. The energy Birmingham shows today – its art, its music, its businesses, and the fact that the city is home to people from all over the world – is built on the dynamism it first showed 250 years ago.

“Jan’s book is a deceptively simple yet beautifully illustrated journey along the canals and through the back alleys of Birmingham’s rich history from the Enlightenment through to the industrial revolution, ably guided via the Lunaticks without whom this dynamic, cultural melting pot we Brummies call home, would be a very different place – and it’s that sense of home that makes us Brummies what we are – happy, deep within the heart of England, inspired by our city full of secrets.”

“This book will be top of my list for not only children this Christmas but also for the grown-up kids still playing hide and seek in those back alleys.” Brian Travers, UB40.