The Comic Legend of William McGonagall 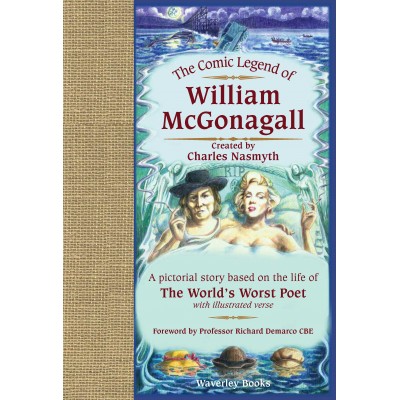 The Comic Legend of William McGonagall was drawn and written by Charles Nasmyth. With an introduction by Richard DeMarco, the book is part-satire, part-fact.

The book illustrates the legend and poetry of the maligned poet William McGonagall. McGonagall was born in Dundee and in this book, which owes much to The Broons and Oor Wullie, and William Blake, and the Surrealists, Nasmyth illustrates 36 key moments in McGonagall’s life. From the romantic partner of Marilyn Monroe, to an enemy of Hitler, the book is a creative look at the fascinating life, and unconventional verse of McGonagall. The binding of the book is made from real jute, out of respect to Dundee's history, home of jute, jam and journalism.

A poet who was ridiculed and beaten in his own time for being the ‘worst poet’, McGonagall’s unique rhymes have attracted much attention over the past decades, and his admirers perhaps most famously included Spike Milligan and Peter Sellers. Both comics dressed as McGonagall and made frequent appearances in The Goon Show. JK Rowling, The Muppets, Monthy Python and Billy Connolly have all either parodied, developed a character similar, or used McGonagall for sketches. Private Eye has also parodied him.

It is the mangled metre, limited vocabulary, clumsy rhythms, distractingly awful rhymes, lack of poetic metaphor and extraordinarily inappropriate imagery of his poems which combine to delight and appall, and it was McGonagall’s indomitable spirit that made his legend grow. Having been drawn to poetry in the 1870s he never stopped his efforts, publishing various collections and broadsheets of his work and touring widely giving readings wherever he went. He became something of a cult figure in his own lifetime.

Scots, young and old, at home and abroad, celebrate his memory, and the presentation of his work in this book will appeal to those who already hold him dear, and bring a new audience to his work who will learn why he had bestowed upon him the elaborate title, ‘Sir William Topaz McGonagall, Poet and Knight of the White Elephant, Burmah’ and understand why he carried an umbrella to protect himself from rotten fruit. McGonagall, who died in September 1902, is most famous for his account of the Tay Bridge Disaster in 1879 when a storm destroyed the bridge as a train passed over it:

Alas! I am very sorry to say

That ninety lives have been taken away

Which will be remember’d for a very long time.