Home|Food and drink|'Whisky in Your Pocket': 10th edition based on the original 'Malt Whisky Almanac' by Neil Wilson

'Whisky in Your Pocket': 10th edition based on the original 'Malt Whisky Almanac' by Neil Wilson 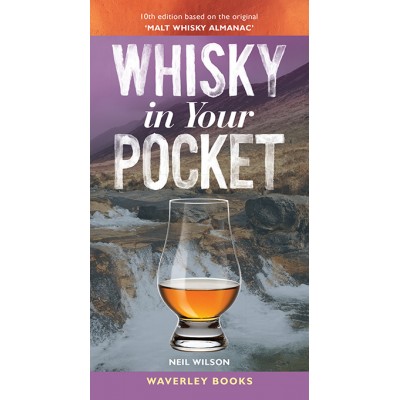 Reviews for the last edition:

'Rarely have I found so much information packed into such a compact book... a goldmine with fresh nuggets to be mined on every page." The Dundee Courier

"Describes regional styles and individual distillery characteristics which will enable you to make a more informed choice about whiskies to try and buy." The Scots Magazine

This is the tenth edition of 'Whisky in Your Pocket', (formerly the Malt Whisky Almanac). This book has a great legacy and vintage. People think that Michael Jackson's book on whisky was the first tasting guide for malt whisky in 1989 but actually Wallace Milroy, and Neil Wilson, came up with the first tasting guide in 1986. Today the book 'Whisky in Your Pocket' is based on Wallace Milroy's book, and is by Neil Wilson, Wallace's editor and publisher.

Today the book contains details for 130 malt and grain whiskies, and 26 blended whiskies with many of the bottle shots reproduced by courtesy of Master of Malt. The book contains clear regional reference maps and up-to-date bottle shots, and guides on pricing. It also gives suggestions for comparable whiskies.

Neil Wilson is a publisher and whisky writer and expert. The Malt Whisky Almanac is known and admired for its simple and straightforward approach, its lack of pretension and clarity. The bones of that book forms this one. This edition is completely revised and expanded.

This edition is an up-to-date guide to whisky suitable for beginners and enthusiasts.

The Dutch language edition of this book will be published in The Netherlands by Conceptual Continuity, and translated by Hans Offringa under the title: Whisky in de Pocket price 12.95 Euro.

On 9 November 1964 Jack Milroy, Wallace's brother, opened a small wine and spirits shop at 3 Greek Street, Soho, London. Wallace joined the store four years later when he left the mining industry. Until then, four whiskies were stocked by Milroys - Glenfiddich, Glen Grant, Glenlivit and Tomatin, but Wallace was a whisky connoisseur and grew the whisky range in stock. The store became visited by the great and the good in London and Wallace was known internationally for his genial approach to customers wishing to learn about Scotch.

The growth of the popularity of the single malt sector owes much to the efforts he and his brother Jack made in central London in the 1960s and 70s. Wallace wrote whisky notes for a book published by Neil Wilson called 'Wallace Milroy's Malt Whisky Almanac' in 1986 which spread Wallace's reputation in the export market. The book sold over 350,000 copies. When Wallace came to sell the store in 1993, Milroy's of Soho was world-famous and contained over 600 different single malts on its shelves. Today the original site of the store is again called Milroy's of Soho, and sells whisky and has a cocktail bar. The bar has a website and celebrates the history of its founding by the Wallace brothers. Jack and Wallace's parents owned and ran The Woolpack Inn in Dumfries, Scotland, until it was demolished. Wallace died in 2016. Jack lives in Suffolk with his wife.

Neil Wilson continued to edit the book and write sections of it to accompany Wallace's notes. The first edition of WHISKY IN YOUR POCKET was published by Waverley Books. The reason behind it was partly because one of the team at Waverley had worked at Bloomsbury Publishing in Soho Square in the 1990s, one minute from Milroys at 3 Greek Street, and discovered whisky and met Wallace Milroy coincidentally through trips to buy whisky gifts at Milroys in Greek Street. Liz Small later met Neil Wilson after reading The Canoe Boys by Alistair Dunnett and was pleased to find NWP also published Wallace Milroy. No one who met Wallace could forget his kind charm and expert advice.

Neil wrote The Arran Malt: An Island Whisky Renaissance, his most recent work. Being one of the original investors in Isle of Arran Distillers, Neil took up the invitation to research and write a book about the company’s history for its 21st anniversary celebrated in 2016. Neil has written a five-language edition on Ardbeg Distillery, Loch Fyne Whiskies, and the Scotch Malt Whisky Society and numerous corporate publications. In 2007 Neil formed ‘Classic Expressions’ with Ian Buxton to republish rare whisky editions and the result of this was the reissue of books such as Nettleton’s Manufacture of Plain Spirit and Truths About Whiskey.

NWP Ltd has over 200 titles in print and e book formats, with books by award-winning authors such as Jim Perrin, Roger Protz, Trevor Braham (a winner of the Boardman Tasker award), Jim Murray, Wallace Milroy, and Catherine Brown. Neil published Wallace Milroy’s Malt Whisky Almanac which was printed in 7 editions and many languages with sales over 300,000. This book is reprised as Whisky in Your Pocket, published by Waverley Books.

In 1986 Wallace Milroy (1931-2016) published the 1st edition of his iconic Malt Whisky Almanac. Various updated editions would follow, whereby Wallace was assisted by Neil Wilson as his editor. In 2010 the name of the book was changed in Whisky in Your Pocket and continued a life on the book shelves. This 10th edition has been written and assembled by Neil Wilson, a distinguished author and publisher in his own right. Neil dedicated this edition to Duncan McGillavry, once the amiable distillery manager of Bruichladdich, who sadly passed away in 2020.

For each distillery in Scotland (malt, grain and newbies) a clear and attractively designed page-long profile is presented with telephone numbers, website, but also water source, grain supplier, number of stills as well as a very short tasting note of the standard bottling of the distillery. In the back Neil reserved space for blended malts, grain whiskies as well as 26 blended Scotches.

This is not an extensive tasting guide, nor an abridged version of the Malt Whisky Almanac, nor a travel guide, but as a publication it stands on itself and may fill a gap here. Given the modest size it really fits into your pocket and is a perfect, modestly priced travel companion for those who want to hunt down distilleries in Scotland and broaden their knowledge. It’s already in my suitcase … waiting for the sign ‘all clear Covid!' Hans Offringa