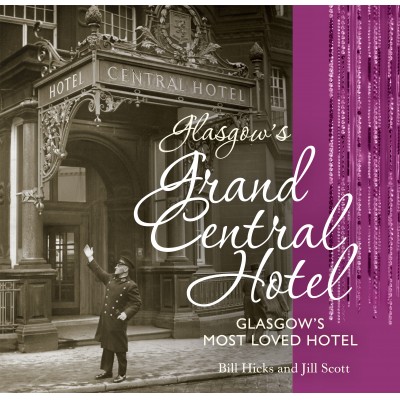 Written by journalists Jill Scott and Bill Hicks, with an introduction by Alex Salmond, this book provides a tantalising glimpse of the Grand Central Hotel’s past and present through the stories of some of the people, ordinary and famous, who have worked in the hotel, stayed as guests or simply passed through its doors on a fleeting visit.

The many illustrations in Glasgow’s Grand Central Hotel include pictures of people’s personal mementoes as well as wonderful images, old and new, documenting the development of the hotel from its beginnings in 1883 as Glasgow’s railway station hotel at Central Station to the bustling presence it has today.

The railway and the businesses surrounding the station, including the Central Hotel, have helped shape Glasgow throughout the years, but also how the new Grand Central Hotel is contributing to Glasgow’s lifeblood today. Images of the new 186-bedroomed Grand Central Hotel, refurbished and opened again in January 2011, adorn this book including pictures of Europe’s longest chandelier which hangs down the stairwell of the main staircase and the new Champagne Bar that overlooks Central Station.