Home|Nostalgia|Are Ye Dancin’? The Story of Scotland's Dance Halls, Rock n Roll – And How Your Da met your Maw

Are Ye Dancin’? The Story of Scotland's Dance Halls, Rock n Roll – And How Your Da met your Maw 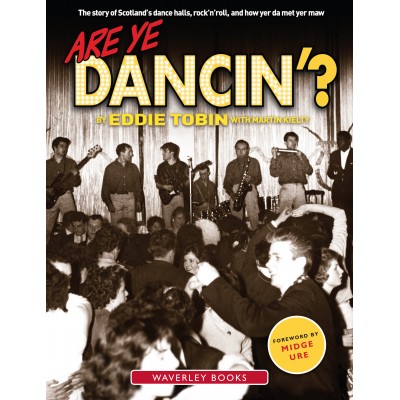 Are Ye Dancin’ is a light look at personal stories and insider views of Scotland’s dance halls. There used to be more than 600 dance halls in Scotland, and the part they have played in Scottish culture after the 1950s is large. If you are nostalgic for the past, or are interested in just how great the dance hall scene was, this book with stories and pictures will entertain.

Eddie Tobin captures the wit and humour of the characters in the dance halls across Scotland where he worked, with his own memories of what made this scene tick in a career that spans 50 years. Eddie’s introductions are followed by anecdotes and stories from people who worked in the halls, with people who went dancing there. In an easy-to-read style this book has more than 100 photographs, and is great for reading cover to cover, or just to dip into.

became a music manager and agent the moment he left school. He managed Scotland’s first boyband, the Bo Weevils, then went on to manage The Sensational Alex Harvey Band, Nazareth, Billy Connolly, Midge Ure and
many others. He then became a leading light in the Scottish entertainment industry, forging close links between licenceholders and the police. He’s now an advisor to the Scottish Government on entertainment and liquor licensing policy, The founder of the Glasgow Nightclub Owners’ Forum and the winner of many industry awards.

Martin Kielty is a musician, radio presenter and writer, also former manager of the Sensational Alex Harvey Band. He currently plays in two rock bands and works on air and online for Rock Radio. Previously he’s written three books on Scottish popular culture: SAHB Story, the Tale of the Sensational Alex Harvey Band (NWP 2004); Apollo Memories (NWP 2005) and Big Noise: the Sound of Scotland (B&W 2006). He frequently appears on radio and in print commentating on Scottish musical culture and the onstage stars – and showcases the venues at the centre of the nation’s love life.