Mark Mechan, part of the team behind the Maw Broon's Cookery Book & Maw Broon's cookery book series of books is the… twitter.com/i/web/status… … 1 day ago 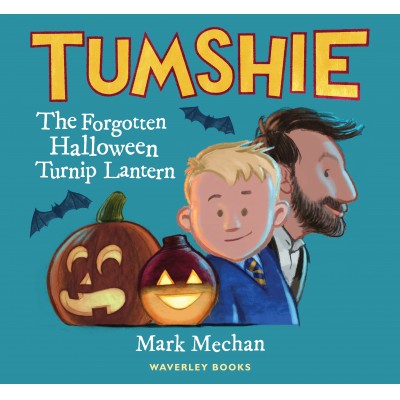 It's Halloween! And old traditions meet the new in Tumshie.

Set today in Scotland, Tumshie is a beautiful illustrated story of a father and his son making old fashioned Halloween lanterns and a costume like Elliot's dad used to make when he was a boy. No off the rack costumes here!

Guising, dooking for apples, and carving a lantern from a ‘tumshie’ (the Scots word for a turnip) are all here in this colourful, illustrated book.

Inspired by the traditions of Scottish Halloweens in the past, author and illustrator Mark Mechan, who trained at Dundee's Duncan of Jordanstone College of Art and Design, has created this book to celebrate a time when Halloween was more home grown.

‘Guising’ (today's Trick-or-Treating) and ‘dooking for apples’ (bobbing for apples) and carving out a ‘tumshie’ were rites of passage for Scottish children who needed the strength of an ox and the stubbornness of a donkey to carve that lantern. In Tumshie, Dad explains that when he was a boy, sweets were a special treat, and a bag of monkey nuts and a mandarin was an exciting surprise. And the Halloween lantern was not a huge bright-orange pumpkin — but a small and very tough Scottish turnip.

We see the pair make a costume for Elliot, which is a crocodile made from cardboard painted khaki, green wellie boots, string and ping pong balls for eyes.

And when the time comes to go out guising, the tumshie lantern is nearly forgotten. Almost! In this happy, sweet book we see the ‘guising’ unfold in this story that blends now with yesterday.

This book will appeal to those who think it is vital to spark the imagination, and to think about sustainability and creating good costumes and things (like an Empire State Building costume) from boxes, eco paint — and imagination.

Mark Mechan grew up in Broughty Ferry with his mum and dad, and is the youngest of four siblings — two sisters and a brother. He went to Forthill Primary and Dundee High, then to Duncan of Jordanstone College of Art in 1988 where he studied Drawing & Painting.
After a few years as a Medical Illustrator in Glasgow, Mark moved into publishing. As a graphic designer and illustrator for Waverley Books, was part of the team that created the hit Maw Broon's Cookbook and subsequent Broons and Oor Wullie titles in conjunction with DC Thomson. Mark works as a freelance illustrator and designer as Red Axe Design, and after creating book covers for hundreds of titles over the years has now become author/illustrator himself, with his debut book Tumshie. He lives in Hamilton with his three children and wife Alison.
Send to a friend or post on:
FacebookTwitter
Show price in: US ($) | Euro (€)