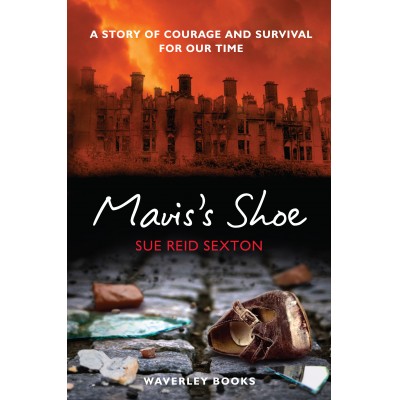 A strong family story told through the eyes of a 9 year old girl.

Lenny survives the bombing, but in the chaos of that night she cannot find her mum and her little sister, Mavis.

The story is told by Sue Reid Sexton in an urgent, true-grit voice, and the early part of the narrative describes the devastation of the blitz as seen through Lenny’s eyes.

During her desperate search for her mum and sister, Lenny finds a shoe she thinks belongs to Mavis and it becomes her talisman in the days that follow. Lenny is forced to flee over the hills to the hut community of Carbeth in the company of a scary neighbour, Mr Tait, her old school teacher, Miss Weatherbeaten, and little Rosie, a girl who is oddly like Mavis. With Mr Tait’s help she finds her mother but still no Mavis.

It is left to Lenny herself in a desperate act to return to the terrifying scenes of devastation and search amongst the rubble for her little sister. This is a powerful story, suitable for ages 10+, and it celebrates the importance of family, friends and supporting each other in a community.

Written by Glasgow writer, Sue Reid Sexton, who has worked with war veterans and as a counsellor specialising in trauma, this book is extensively researched and covers what went on in Clydebank, Glasgow and Carbeth during this harrowing time in Scotland’s history.

A sample from the novel:

Most of the tenement building over the road had gone, and what was left was burning. I’d never seen flames the size of these, leaping and gobbling everything up. This made no sense to me. I searched my memory for something I could compare this to but there was nothing, just like there was almost nothing left of this building, only a hole where something indestructible had been . . . Behind me, behind the houses, beyond, there were flames bigger even than the flames over the road, reaching right into the sky, so much flame it was like there wasn’t room for it all down below. It lit up the whole sky and all the buildings. There was nothing hidden. The Gerries had found us and we were laid bare naked, and I had lost Mavis.

A reading of Sue Reid Sexton's part-dramatisation of her novel Mavis's Shoe recorded by a member of the audience in 2011 at Glasgow's book festival AYE WRITE. Not wonderful sound but gives a taste of the story and book. Written by Sue Reid Sexton, performed by actors. Produced with permission.

Some facts and figures:

The Clydebank Blitz took place on the nights of the 13th and 14th March 1941. The Luftwaffe chose to target the shipbuilding town of Clydebank in Scotland during those nights because of the full moon. During the bombing raids most of Clydebank was destroyed, suffering the worst destruction and loss of civilian life in all of Scotland. While there is still some discrepancy over the number of casualties, we know more than 500 people died (and many estimate the dead at much more than this), over 600 people were seriously injured, and hundreds were injured by the blast debris. Only 7 houses remained undamaged out of 12,000; 4000 houses were completely destroyed, and 4500 seriously damaged; over 35,000 people were made homeless; 439 bombers dropped over 4000 bombs including some 2400 incendiary devices; only two enemy aircraft were shot down by the RAF; the Singer factory was destroyed but the landmark Singer tower survived, as did the docks. It was the use of bombs on parachutes, designed to maim and kill at ground level, which made the attack so devastating.

Sue has three published books by Waverley Books: 2 novels and 1 non-fiction.
Mavis’ Shoe (novel), Rue End Street (novel) and Writing on The Road (non-fiction).
Sue's books have been translated into two foreign languages, and Mavis’s Shoe was a Waterstone’s Top 20 of the Year, Scotland. It was also chosen by Scottish Booktrust for promotion, who commissioned a teachers’ resource pack to help teachers explain the book's themes of war, bombing, refugees, and the problems young children face when coping with grief and loss. The teacher’s pack is still available.
In 'Writing on the Road' Sue Reid Sexton describes how she travels solo in a tiny campervan which she uses as a creative space and general escape hatch. For a single day or weeks at a time, she disappears up glens and over mountains to write. Writing on the Road is about these flights, but is also a travel journal, a guide to living in the moment, to coping when your marriage unravels and how, as a single woman with children, she stays creative against the odds. The book has many facets and campervan don'ts and do's, and, importantly, how to face fears - especially how not to be scared in the dark. "Sue Reid Sexton speaks with a courage and humour that shine through this inspirational, honest and moving story." The Sunday Post

Sue speaks regularly at events on helping women to find the time and space to write and the joys of the wilderness. She is a graduate of Glasgow’s Creative Writing MLitt course. She runs daily meditation sessions, and works as a counsellor specialising in trauma. Sue has run events at Glasgow’s Aye Write Festival, Edinburgh Book Festival, Dundee Women’s Festival, and made frequent radio and TV appearances in connection with her continuing work on the Clydebank Blitz. 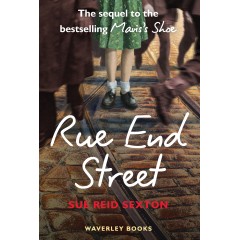