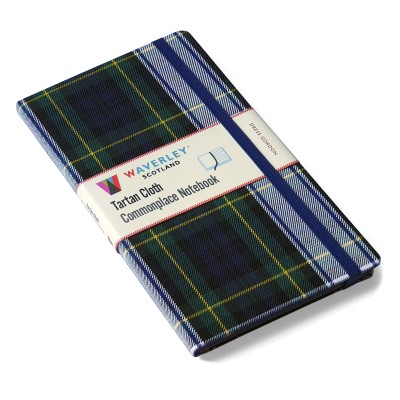 The Dress Gordon tartan’s dark greens, blues and blacks are brightened by wide flashes of white and yellow accents.

The first record of the Gordons places them in the Lowlands and suggests that they were of Anglo-Norman origin. The Highland clan is claimed to be descended from Sir Adam Gordon (d. 1333), a supporter of King Robert the Bruce, who received the lands of Strathbogie in return for his services to the king. The family built Huntly Castle on these lands at the beginning of the 15th century.
Although the senior male line ended in 1402, the marriage of Elizabeth Gordon (d. 1439) to Alexander of the influential Seton family consolidated their powerful position in the Highlands.

They further profited from the authority given to them by the Stewart kings and gained other lands and titles, including those of Sutherland. This inspired the sobriquet “Cock o’ the North”, a nickname affectionately given to the Chief of the Gordons. They did come into conflict with the Scottish Crown when George Gordon, the 4th Earl of Huntly (1514–1562) contested the earldoms of Mar and Moray bestowed by Mary, Queen of Scots on her half-brother James Stewart (c. 1531–1570). In October 1562, the Gordons were defeated by a royal army at the Battle of Corrichie in Aberdeenshire. Earl Huntly died during the fray and his body was later taken to Edinburgh where it was publicly disgraced. However, the 5th Earl (d. 1576) made peace with Mary and became her Chancellor in 1565.

The Gordons of Haddo acquired their lands in the northeast in the 15th century. Haddo House, a fine example of Palladian architecture (inspired by the designs of the Italian architect Andrea Palladio) by William Adam (1689–1748), was built for them in the 17th century.

About the notebook: This notebook is made with cloth woven in mills in the United Kingdom. Notebook pages and paper components are made with acid-free 80gsm paper from sustainable forests. Boards used in the binding process are made of 100% recycled paper. This hardback notebook is bound in genuine British tartan cloth with an elastic closure, ribbon market, eight perforated end leaves and expandable inner note holder. It contains a removable booklet about the history of clan tartans, and a bookmark that gives information on the Dress Gordon tartan.

Kinloch Anderson: The tartan cloth is supplied by and produced with the authority of Kinloch Anderson Scotland, holders of Royal Warrants of Appointment as Tailors and Kiltmakers to HM The Queen, and HRH The Prince of Wales.