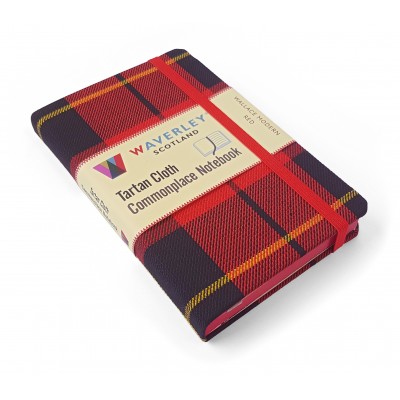 The Wallace Modern Red tartan is predominantly red with black,and touches of yellow.

Clan Wallace are of the Lowlands, with connections to Ayrshire and Renfrewshire. Their most famous son was Sir William Wallace
(d. 1305), Guardian of Scotland and icon of Scotland’s Wars of Independence – known worldwide because of his depiction in the 1995 Mel Gibson film Braveheart.

One of the followers of Walter Fitz Allan – David I’s Steward – was a Richard Wallace from Owestry on the Welsh border. Richard settled in Ayrshire c.1160. Richard’s grandson Adam Walays had two sons – the elder inheriting the estates in Ayrshire; the younger son, Malcolm, receiving lands in Auchinbathie and Elderslie in Renfrewshire. The discovery in 1999 of the seal of William Wallace, identified Wallace as the son of Alan Wallace of Ayrshire – a name which appears in the Ragman Roll of 1296. There are no septs of the Wallace clan – as decided by the current Clan Chief Andrew Robert Wallace (b. 1964) – but there are
several ways of spelling the name, such as Wallice, Wallis, Walys, Walense, Waleyss Vallance and Uallas. The Clan Wallace clan motto is, Pro libertate (“For Liberty”).

About the notebook: This notebook is made with cloth woven in mills in the United Kingdom. Notebook pages and paper components are made with 80gsm acid-free paper from sustainable forests. Boards used in the binding process are made of 100% recycled paper. This hardback notebook is bound in genuine British tartan cloth with an elastic closure, ribbon market, eight perforated end leaves and expandable inner note holder. It contains a removable booklet about the history of clan tartans, and a bookmark that gives information on the Grant Ancient tartan.