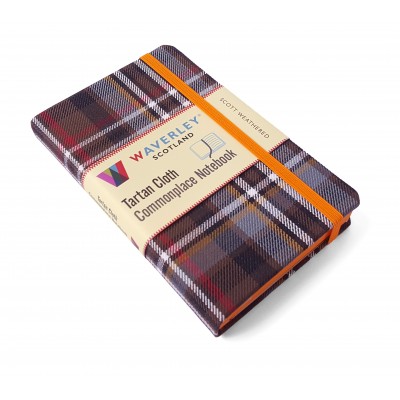 The earthy tones of the Scott Weathered tartan are an elegant blend of green and grey, with pink, white and yellow stripes. This beautiful weathered tartan is based on an imagined natural ageing of the green Clan Scott tartan.

Clan Scott, whose motto is Amo (I love), are a clan of the Scottish Borders area whose name is connected to the Scoti, the Irish tribe who settled in Scotland and gave the country its name. Scoti or Scotti is the Latin term for the Celts of Ireland. The earliest record of the name was that of Uchtred filius Scoti, meaning “son of a Scot”, around 1124. From him, the Scotts of Balwearie and Buccleuch are descended. In addition, there would have been families with the name Scott that had no connection with each other, but they would have been named as such because they were regarded as Scots by their southern neighbours.

One of the most famous of the Scotts, historical novelist, playwright and poet Sir Walter Scott,1st Baronet of Abbotsford (1771–1832), is descended from the Scotts of Harden near Hawick in the Borders. Scott was the chief catalyst for the re-introduction of tartan to Scotland. There is more information about Scott on the leaflet inside the notebook.

About this notebook: This pocket notebook is made with genuine tartan cloth woven in mills in the United Kingdom. Notebook pages and paper components are made with 80 gsm acid-free paper from sustainable forests. Boards used in the binding process are made of 100% recycled paper. This hardback notebook is bound in genuine British tartan cloth with an elastic closure, ribbon marker, eight perforated end leaves and expandable inner note holder. It contains a removable booklet about the history of clan tartans in 9 languages, and a bookmark that gives information on the Scott Weathered tartan.