Home|History|Ireland History of a Nation

Ireland History of a Nation 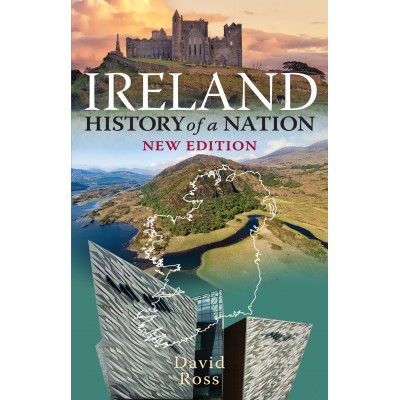 "helped me with my studies and history of Ireland".

This very readable and concise history of Ireland by David Ross tells the story of Ireland from prehistoric times to the present day. Fact windows in the text highlight many noteworthy aspects of Irish history and a chronology gives an overview of Ireland’s major cultural, political and religious trends.

For the greater part of a millennium, while Europe seethed, churned and changed, Ireland did not operate as an independent national state.

While past events in Ireland have often created disarray in British politics, and the history of Ireland is sometimes told as a history of England-in-Ireland, an effort has been made in the writing of this book to tell the story of the Irish people, as the Irish people have maintained a very clear identity for generations.

• Ireland in the twenty-first century

• The coming of Christianity

• The arrival of the Norseman

• Irish reassertion and Richard II, the reformation and the downfall of the Kildares

• Ireland under James I and VI

• Ireland in the seventeenth century

• Ireland in the Eighteenth Century

• The nineteenth century and the rebellion of 1848

• Irish society at the turn of the century