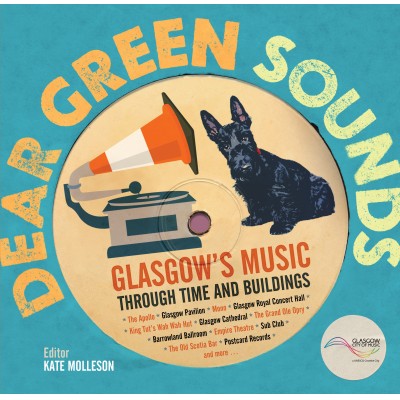 Glasgow is home to music.

From the Apollo to Barrowland and The SECC, and Glasgow’s Royal Concert Hall to The Old Scotia Bar, Glasgow is known throughout the world for its music and live venues. It is the live venues that become the heart of any music community, and Glasgow – like no other city outside London – has thrived on adding new venues to make it possible for visiting musicians of all types to be welcomed in the city.

Glasgow has been home to chants, madrigals, grand opera, rock and roll, piano sonatas, rhythm and blues, ragtime, piping and music of every genre. We decided to tell the story of Glasgow’s music through its venues, spanning the history from earliest origins to the present day. The venues are the places people have thronged, to be part of the city’s passion with music.

Centuries of music are covered in this book which is fully illustrated throughout. The history of music and performance are represented - composers, virtuoso instrumentalists, orchestras, choirs, singers, conductors, impresarios, bands, acts and soloists who have been welcomed by Glasgow audiences over the years. As such the book is a collection of memories and stories about the people who have performed in the city, and range from Moore and Burgess Minstrels of the 1880s, to Mario Lanza, Frank Sinatra, Orange Juice, The Rolling Stones, David Bowie to Celtic Connections and visiting bands and orchestras from all over the world.

This is the first book to celebrate the collective history of Glasgow’s music.

Kate Molleson is the editor of 'Dear Green Sounds', and writes about music for The Guardian and The Herald; Kate is editor of the book, and also the author of the Introduction.

Dr Elaine Moohan is a senior lecturer in Music at the Open University, and author of the chapter on Glasgow Cathedral - Before the Reformation; Dr Gordon Munro is Director of Music at the Royal Conservatoire of Scotland, and General Editor of 'Musica Scotica'. His research interests include early Scottish Church music and music education; Dr Munro is the author of the second part of the chapter on Glasgow Cathedral: After the Reformation.

Tom Service wrote the chapter on the City Halls, and he writes and broadcasts about music for The Guardian and BBC Radio 3. His books 'Music as Alchemy' on conducting, and interviews with Thomas Ades are published by Faber.

Keith Bruce wrote the chapter on The Royal Conservatoire and he has been arts editor of The Herald in Glasgow for over 20 years. He serves on the boards of Glasgow Jazz Festival, and Enterprise Music Scotland. He owns a tenor saxophone.

The chapter on The Scotia Bar is by Ewan McVicar, and he is an author, songmaker, and storyteller. Ewan McVicar was educated in Glasgow libraries and acquired his performing skills in Glasgow folk clubs, pubs and other venues. He has written several books and websites about Scotland's traditional songs, and he has composed over 100 songs with Scottish schoolchildren. Currently he is very active in social projects in Uganda.

Conrad Wilson wrote the chapter on the Theatre Royal. He was staff music critic of The Scotsman from 1963 until 1991 and today writes for The Herald. Mr Wilson was the Edinburgh Festival's programme editor for 16 years; he lectured on opera at Glasgow University and has written 19 books, including a major biography of Puccini for Phaidon, the authorised biography of Sir Alexander Gibson for Mainstream, and histories of Scottish Opera and the Royal Scottish National Orchestra for Collins.

Alison Kerr wrote the chapter on The Empire Theatre, and she is a freelance journalist who writes primarily for The Herald and The Scotsman.

Graeme Virtue wrote the chapter on Barrowlands; he is a journalist and broadcaster and lives in Glasgow. He writes about music for The Guardian.

The chapter on BBC Scotland was written by John Purser who is a composer, playwright and musicologist and wrote the award-winning radio series and book 'Scotland's Music'. John Purser also wrote the chapter on The Piping Centre and The College of Piping.

The chapter on the Apollo was written by Graeme Virtue (see above).

Martin Cloonan wrote the chapter on Glasgow's Ole Opry and he is Professor of Popular Music at the University of Glasgow.

Postcard Records was written by Vic Galloway; he is an Edinburgh-based BBC broadcaster, journalist and writer.

The chapter on the SECC was written by Professor Cloonan (see above).

Malcolm Jack is a Scottish freelance music and arts journalist based in Glasgow and wrote the chapter on Sub Club.

The chapter on King Tut's Wah Wah Hut is by Vic Galloway (see above).

Mono was written by Neil Cooper who is an arts writer and critic, based in Edinburgh.

The final chapter on The Glasgow Royal Concert Hall was written by Tom Service (see above).