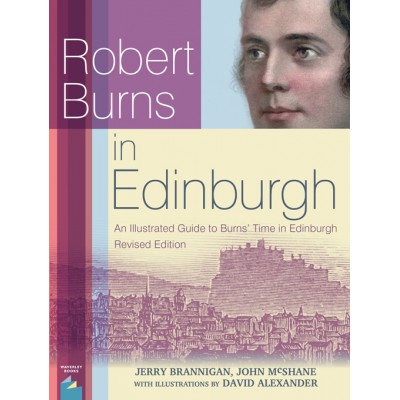 A revised edition of Robert Burns in Edinburgh now available.

A beautiful, fully illustrated colour guide to Robert Burns' time in Edinburgh, with fresh research, maps and illustrations of the key people Burns met, with 27 relevant poems by Burns throughout.

With more than 100 illustrations by David Alexander and 80 photographs by Jerry Brannigan of key people and places Burns encountered. Includes easy to follow routes and walking guides in Edinburgh arranged by area and place/people.

Burns’ time in Edinburgh was special, and a creative period in his life.

Today Robert Burns is widely regarded as the national poet of Scotland and people all over the world annually celebrate Burns Night on 25 January. Famous for Auld Lang Syne, Scots Wha Hae, and A Man’s A Man for A’ That, Rabbie inspires Scots to be proud of Scotland. But when he arrived in Edinburgh in November 1786 Burns was unknown. Within days however ‘the Ploughman Poet’ was the talk of the capital, mixing in a circle of wealthy and important new friends. This was the time of the Scottish Enlightenment, a period of great intellectual and scientific achievement. Burns’ experiences during his Edinburgh stay included love affairs and fathering illegitimate children, and they influenced much of his work to come. His friendship with Agnes ‘Nancy’ McLehose led to the poem Ae Fond Kiss, among others.

To capture the events of these vital months, three Burns enthusiasts from Glasgow – Jerry Brannigan, John McShane and David Alexander – have newly researched this period in Burns’ life for this book. In the process of the research, Jerry Brannigan discovered a link to a previously unknown portrait of Burns by Alexander Nasmyth.

This guide to Edinburgh features pictures of the people Burns met, and present-day photographs of the places he visited helps you to envisage this colourful period of Burns’ life. Presented as a guide to Edinburgh by area and site, the book has walking maps and information about each venue with website and locator maps.

Many poems by Burns are included, and other writings inspired by the characters he met and places he visited (although many of these were written after Burns had left Edinburgh).

Reviews for the book:
“A most informative guidebook for the tourist to Edinburgh and an essential addition to the library of Burns enthusiasts.”
– Burns Chronicle

“It is a joy to pick up and browse, every couple of pages yielding points and observations about the time spent in the city, the people he met, the places he visited.”
– Glasgow and District Burns Association

“The strongest and most immediate impression this book makes is that Robert Burns was a networker par excellence. He knew a dizzying number of people...”
– The Herald