Home|History|Mein Rant: A Summary in Light Verse of Mein Kampf

Mein Rant: A Summary in Light Verse of Mein Kampf 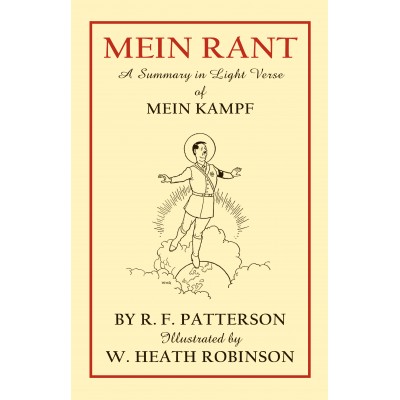 Mein Rant was written as a parody of Hitler’s Mein Kampf in 1941 by a Scottish lexicographer who worked for the Scottish publisher Blackie. This book is a facsimile reproduction. Illustrations by Heath Robinson.

When Germany invaded Poland on 1 September 1939, to reclaim the land they ‘lost’ after World War One, many feared that Britain would not honour her many pledges of support to Poland. Britain stood alone. France feared a major war, and would not help. The USA was not prepared to get involved. Suddenly Adolf Hitler, with whom Prime Minister Chamberlain had negotiated ‘peace in our time’, and whom the Defence Secretary had called ‘most sincere’, was revealed for what he was.

Within six months of declaring war, Britain faced massive loss and possible surrender. By May 1940, Prime Minister Winston Churchill was being asked to approve plans to evacuate the Government, Royal Family and the Bank of England’s gold to Canada. Some 200,000 British troops stood on the beaches of Dunkirk, unable to get home, while Churchill bartered with the Americans to send destroyers to help rescue them.

In the previous six months, children had been evacuated from London and cities; men had been called up and mobilised; and women had gone to work in munitions factory to do men’s jobs for the first time.

People knew their lives would never be the same again.

Amidst all this, propaganda was rife. Propaganda works best when the enemy is diminished and portrayed as a manageable entity, certain to be defeated. Much of the German propaganda was sinister, especially its portrayal of its Jewish citizens. American propaganda was cautionary and dark. British propaganda, on the other hand, was based on the premise that the righteous should prevail and that those in the wrong – be they errant schoolboys, bullies, or robbers, or even wartime leaders – should always fail. Rubbishing the enemy, assassinating nasty characters with humorous methods – these were techniques people learned from comics; and Britain was expert in this area.

Hitler’s autobiography Mein Kampf (‘My Struggle’), was written while Hitler was in Landsberg Prison, and was published in two volumes in 1925 and 1926. Mein Kampf was so widely read in Germany that it was produced in special wedding gift editions.

RF Paterson said of it: “Mein Kampf had neither rhyme nor reason, while my abridgement undoubtedly has rhyme.’ Based on the rhythm of Gilbert and Sullivan, Mein Rant is sure to entertain and amuse anyone who appreciates satire.