Home|History|Scottish Painting: 1837 to the present

Scottish Painting: 1837 to the present 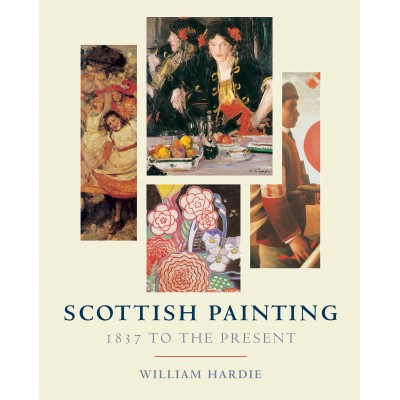 Now revised and in its third edition, with a new introduction and with some revisions to the illustrations, Scottish Painting will be welcomed as a major reference work on Scottish art especially by a new generation.

Scotland has a long and distinctive tradition of visual art and painting, and Scottish painters have made a significant contribution internationally since the time of the Scottish Enlightenment. Hardie picks up the story of Scottish painting from 1837.

The nineteenth century was a period of industrialization and a subsequent expansion in wealth. The establishment of the Glasgow School of Art and the emergence of The Glasgow Boys put Glasgow on the art map. Charles Rennie Mackintosh, as part of ‘The Four’, is internationally celebrated for his genius, and what became known as the Glasgow Style went on to become a major inspiration for the Art Nouveau movement.

The Colourists – Peploe, Cadell, Hunter and Fergusson – influenced as they were by the new developments in French painting, had a significant influence on contemporary Scottish art, and made a key contribution to world painting. The book then explores the work and far-reaching influences of other twentiethcentury artists including Stanley Cursiter, Joan Eardley, John Byrne, Stephen Campbell, Adrian Wisniewski, Elizabeth Blackadder, and Peter Howson, and looks to the artists of the twenty-first century.

This third edition of William Hardie’s Scottish Painting, with revisions and a new
introduction, is an authoritative and significant contribution to writing on art.

William Hardie is an acknowledged authority on Scottish painting. He was educated at Glasgow Academy and Glasgow University, and was Keeper of Art then Deputy Director of Dundee Art Gallery and Museum. He joined Christie’s in Scotland and set up the Scottish Pictures Department, which played a major role in the transformation of the international market for Scottish art. He formed William Hardie Limited in Glasgow in 1984, as consultants specialising in Scottish painting, He has pioneered the renewed interest in Scottish artists such as the Glasgow School, George Dutch Davidson, Stanley Cursiter, William McCance and Donald Bain. Peter Howson held his first solo exhibition at the Hardie Gallery.