Home|History|Robert Burns in Your Pocket: A biography and selected poems of Scotland’s National Poet

Robert Burns in Your Pocket: A biography and selected poems of Scotland’s National Poet 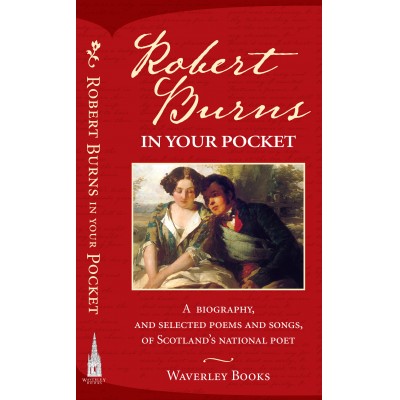 Robert Burns in Your Pocket has a clear and accessible biography of Burns and his work, with fifty-two (52) of Burns’ poems and songs, a comprehensive glossary of Scots words, and an index of first lines. Illustrated with line drawings of scenes from Burns’ life, this book also gives a brief introduction to each poem. The book makes an elegant gift or beautiful reference work for your own book collection.

Robert Burns lived in, and was inspired by, Ayrshire, Edinburgh, and Dumfries, and the book includes a guide to key landmarks in the section ‘The Land o’ Burns’. This stylish book combines quality and value.

Burns was born in Alloway on 25 January 1759, the oldest son of seven children. His family were poor farmers, and led a frugal, demanding life. By his mid-twenties, Burns was an accomplished writer of verse, and his first volume of poetry, Poems, Chiefly in the Scottish Dialect , was published to great acclaim in 1786. Burns’ work shows irony, wit, romanticism and sentiment, as well as bawdy humour, a seemingly indiscriminate admiration for women, and a capacity for compassion and feeling for his fellow man. Burns died on 21 July 1796. By then he was a celebrity and a prolific poet, and he left behind a body of work that is now celebrated worldwide.