The Complete Poems and Songs of Robert Burns 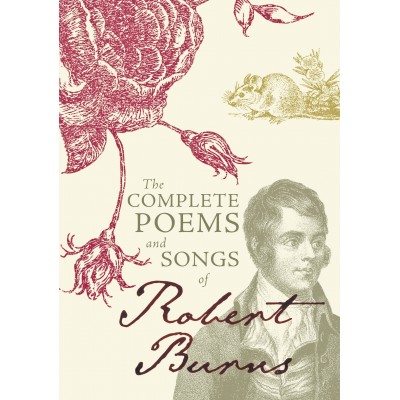 Robert Burns is more than Scotland’s national poet. As the BBC website says: 'His poems have been translated into more than 40 languages including Latin and Esperanto and his face has featured on stamps, coins and banknotes worldwide.' The author of 'Auld Lang Syne' and 'Ae Fond Kiss' (both are sung all over the world) Burns is today a symbol of Scottish national identity.

Burns was born in Alloway on 25 January 1759, the oldest son of seven children. His family were poor farmers, and led a frugal, demanding life. By his mid-twenties, Burns was an accomplished writer of verse, and his first volume of poetry, Poems, Chiefly in the Scottish Dialect, was published to great acclaim in 1786.

Burns’ work shows irony, wit, romanticism and sentiment, as well as bawdy humour, a seemingly indiscriminate admiration for women, and a capacity for compassion and feeling for his fellow man.

Burns died on 21 July 1796. By then he was a celebrity and a prolific poet, and he left behind a body of work that is now celebrated worldwide. A bestselling edition of Burns’ work, this edition excludes his bawdy verse.