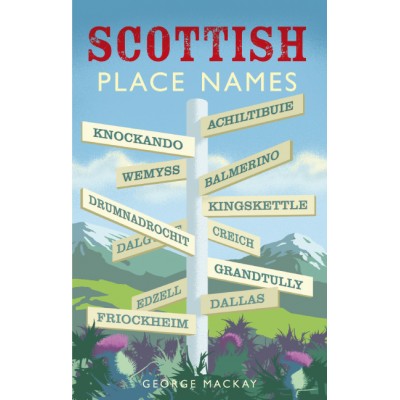 Containing almost 2000 entries, this volume is far from being just a list – it is history and geography: a gazetteer in one!

Towns, villages, islands, mountains, lochs and rivers of Scotland – all are listed, and the derivation of their names – some curious – some extraordinary – is given throughout.

All have a story to tell, and Scotland’s rich history is apparent in these place names. Celtic, Nordic and Anglo-Saxon influences that span 2000 years from the beginning of the Common or Christian Era to the 11th century are shown. And as the incoming Celts did not find an empty land, some names can be traced to Pictish times.

With the arrival of the Scots in the 6th century, Gaelic names began to appear, and then, a century later, Anglian names appeared from the south, to later be influenced by French and Dutch, becoming the ‘Scots’ tongue of the Middle Ages.

The advent of the Norsemen in the 9th century produced Norse names in the North, the Northern and Western Isles and the South-West. Many names are Scots transliterations of Gaelic. Auchenshuggle, long thought of as an appropriate destination for Glasgow’s tramcars is simply a Scots version of the Gaelic for ‘rye-fi eld’.

The book explains how, over successive generations with political, economic and cultural changes, while Scots became established, place names were not renewed or translated – they were merely Scotticised. And so today, with English as the common tongue, we can be reminded of the past at just about every turn.

This book provides a fascinating journey that might take you from Aberbrothock to the Butt of Lewis, Cruachan to Dunnet, on to Ecclefechan and Friockheim, Gretna, Hoy, Ibrox, John o’ Groats, Kells, pausing at Lanark before seeking out Mealfuarvounie, Nick, Oxgangs, Patna, Quanterness, Rum, Sciennes, Talisker, Uig,Voe, Waterloo, Yell and Zetland – your journey has just begun!