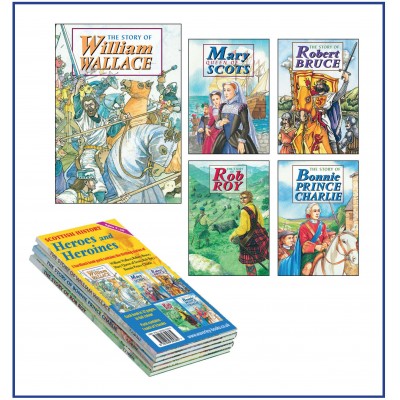 Written for children aged 7+, the illustrated books in this series are educational and historical. They help children understand the importance of key figures in history in a very accessible way. They are good for school projects and general information or inspiring the child in your life to read widely.

The Story of William Wallace: The thrilling story of how Sir William Wallace, a Scottish patriot and national hero, led his army against the English at the Battle of Stirling bridge.

The Story of Mary Queen of Scots: The story of Scotland's Youngest Queen who was imprisoned because she was seen a a threat to Queen Elizabeth 1.

The Story of Robert Bruce: An exciting account of the life of the warrior king who secured Scotland's independence from England.

The Story of Bonnie Prince Charlie: The story of Charles Edward Stuart in his quest for the return to the throne of a Stuart king.

The Story of Rob Roy: A popular Scottish folk hero, Rob Roy is the nickname for Scottish hero Robert Roy MacGregor, who has been described as a Scottish Robin Hood.