Home|History|God Bless Mrs McGinty! My Life and The Sunday Post

God Bless Mrs McGinty! My Life and The Sunday Post 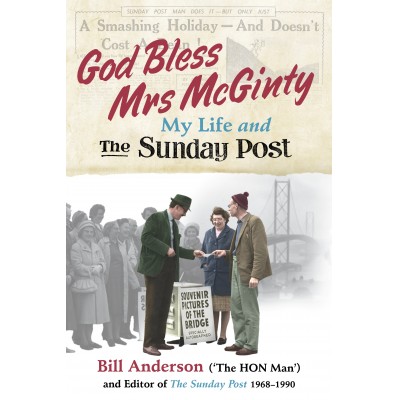 The Sunday Post was the all-time bestselling Sunday newspaper across the UK from 1969 and 1970s. Why and how? The paper made the Guinness Book of Records for its penetration of sales.

Today it is in decline as so many Sunday newspapers are but then The Sunday Post was a must for most households in the UK and its sales across the world the readership was estimated at 2.9 million. This book chronicles the story by Bill Anderson about his life and times as the editor of one of the UK's most successful Sunday newspapers through that period of growth from the late 1930s to the 1980s.

Memoir
The memoir was written in 1982 while Bill Anderson was recovering from a near-fatal car accident. The manuscript remained undiscovered until 2014 when Bill's wife Maggie came across it when she was clearing out her desk -– 'not before time' he would probably have said. The manuscript was entitled 'Who the Hell is Bill Anderson?'
Published by Waverley Books as a memoir, this book is a fascinating account of childhood in working-class Scotland in the 1930s and 40s, "of the wee boy who would grow up to edit the best-read newspaper in the world".
The autobiography tells of Bill's broad experience from his working-class roots, through childhood to editor.
He worked aboard the MV Marilyn Abbott; then trained as a doctor at Glasgow University via Hartwood Hospital and the Army. But he left medicine and joined The Sunday Post. He became the "Hon Man" which was a column about traveling for free. As editor of The Sunday Post he was "passionate, tenacious, campaigning and demanding". In 1990 Bill left the editor's chair to become managing editor, and the following year he won a Scottish Press Award for his lifetime's work. Though a traditional newspaperman, he was immediately aware of the impact that the internet would have on journalism, and in the early 1990s he set up Scotland Online, a joint venture between DC Thomson and Scottish Telecom. In 1991 he became the first Scottish member of the Press Complaints Commission. He was appointed CBE in the same year.
This book will appeal to those who enjoy reading about Scotland's popular history, and remember the nostalgic days of The Sunday Post, as well as students of media and journalism.
Send to a friend or post on:
FacebookTwitter
Show price in: US ($) | Euro (€)