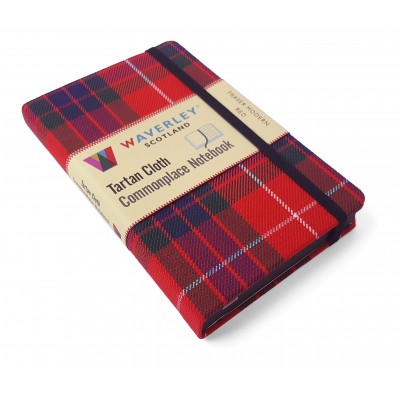 The vibrant Fraser Modern Red tartan is predominantly red with details in blue, green and white.

The Fraser Modern Red tartan colors are red with details in blue, green and white. The Frasers are a Lowland clan, said to be of Norman origin. It is suggested by some that the name is derived from the town of Fréselière in Anjou, France. The name is first found in the south of Scotland in the 12th century. Another suggestion is that the Frasers were a tribe in Roman Gaul. Their badge was a strawberry plant (fraisierin French).

In 1160 Simon Fraser held lands at Keith in East Lothian. It is believed he was given the church at Keith to the abbey at Kelso. In 1306 Sir Simon Fraser of Oliver Castle was executed by Edward I of England after he was captured while fighting for Robert the Bruce. It was around this time that the Frasers left East Lothian and began to establish the clan in Aberdeenshire.

Sir Simon's cousin, Sir Alexander Fraser, married the sister of Robert the Bruce and became the king's chamberlain. His elder brother, also named Simon, was the progenitor of the Frasers of Lovat. The Frasers of Lovat are a separate clan of the Highlands. Some do not acknowledge them as a clan in itself. The Lovat Frasers were involved in the famous battle of Blaire-na-Leine, called 'Battle of the Shirts', with the MacDonalds of Clanranald in 1544. Losses on both sides were heavy. The MacDonalds were victorious. Lord Lovat and his son were killed.

Clan Fraser were not involved in the Jacobite rebellions. Their Highland relative Clan Fraser of Lovat were Jacobites.

The clan motto is “All my hope is in God”.