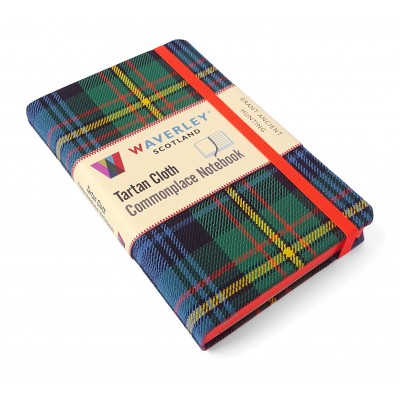 The Grant Ancient Hunting tartan is a cheerful combination of blues and greens, brightened by yellow and orange-red stripes which are bolstered by black undertones.

The Grant Ancient Hunting Tartan colors are a combination of blues and greens, brightened by yellow and orange-red stripes with black.

Clan Grant of Strathspey have several associated tartans, They include the Black Watch. The colorful sett featured on this notebook has a military origin. Sir James Grant of Grant (1738-1811) raised two regiments in the late 18th century. These were the 1st Strathspey Fencible Regiment and the 97th Regiment of Foot. Both regiments almost certainly wore this tartan of green and blue with black, red and yellow. The Grants appear to have first acquired lands in Stratherrick through marriage. Following their support for Robert the Bruce (and further marriages) they went on to acquire further lands. These were in Glen Moriston, Glen Urquhart, and Strathspey, the area with which they are most closely identified. By the beginning of the 14th century, the Grants were established as one of the most powerful and influential of the Highland clans.

In 1725 the Grants formed part of the regiment that went on to become the 42nd Highlanders, known as the Black Watch. The Grant name is probably made most famous by its whiskey connection. In 1887 William Grant built the distillery of the now world-famous Glenfiddich whisky.