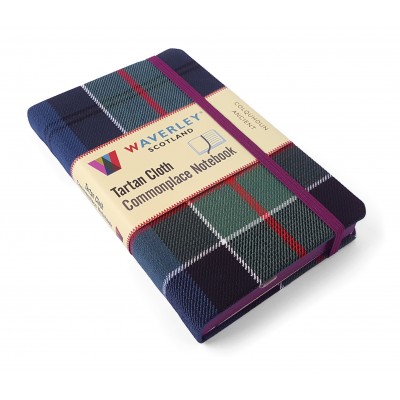 The Colquhoun Ancient Tartan is green with blue and black, with thin white and red stripes.

The Colquhouns are a Lowland clan. They adopted the surname 'Colquhoun' after the name of the Dunbartonshire lands that they were granted in the time of Alexander II's reign. The principal branch of the family is based in Luss at Loch Lomond. Their historic seat was at the now-ruined Dunglass Castle by the River Clyde in West Dunbartonshire. The Colquhouns also have a connection to Dumbarton Castle. Dumbarton Castle is open to the public, but little of the mediaeval structure remains. King James 1 is said to have asked John Colquhoun, 10th of Luss, if he would seize Dumbarton Castle. The chief is said to have replied in French 'Si Je Puis', which became the clan motto “If I can”. The chief's clansmen did secure the castle. Since 1875, the Luss Highland Gathering has been held just outside the village. The chief of Clan Colquhoun is the chieftain of the games.

About the notebook: This notebook is made with cloth woven in mills in the United Kingdom. Notebook pages and paper components are made with 80gsm acid-free paper from sustainable forests. Boards used in the binding process are made of 100% recycled paper. This hardback notebook is bound in genuine British tartan cloth with an elastic closure, ribbon market, eight perforated end leaves and expandable inner note holder. It contains a removable booklet about the history of clan tartans, and a bookmark that gives information on the tartan.