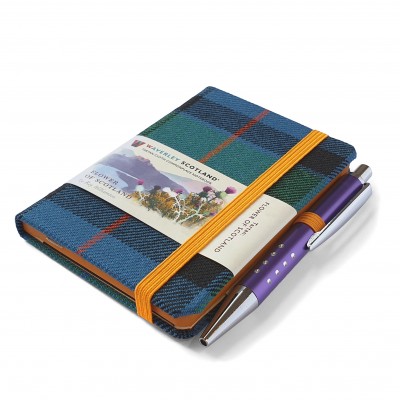 The song was composed in the mid-1960s by Roy Williamson, who, with Ronnie Browne, made up the hugely popular Scottish folk duo The Corries.

The lyrics refer to the victory of the Scots, over Edward II, led by Robert the Bruce at the Battle of Bannockburn, 1314.
The song was first heard publicly in a 1967 BBC television series and has grown in popularity over the years, preferred by many as a national anthem, over “Scots Wha Hae”, “Caledonia” and “Scotland the Brave”.
In a poll, conducted by The Royal Scottish National Orchestra in 2006, to determine which tune the country should use as its national anthem, “Flower of Scotland” came top and took 41 per cent of the vote.

Our notebook is bound in genuine Flower of Scotland Tartan, woven in Great Britain.

The cloth is supplied by House of Edgar.