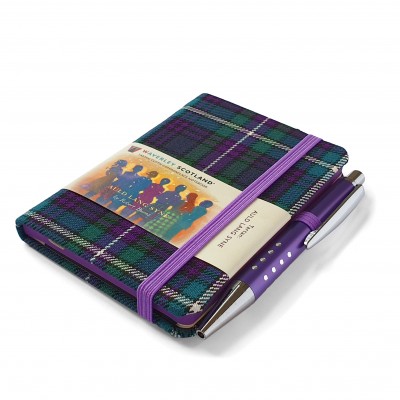 A notebook with the lyrics of Auld Lang Syne printed on a leaflet inside the notebook, with the story behind it. This series was inspired by the importance of the ballads and songs of Scotland in the country’s life, heritage and culture.

“Auld Lang Syne” - "old long since" or "times gone by"- is an old Scottish song that Robert Burns contributed to the 1796 edition of the book, Scots Musical Museum.

Burns made some refinements to the lyrics and transcribed it, having heard it sung by an old man from the Ayrshire area of Scotland, Burns’s homeland.

The song asks whether old friends and times will be forgotten, and promises to remember people of the past with fondness: “For auld lang syne, we’ll tak’ a cup o’ kindness yet.”
Elements of the song can be traced back to the 1500s.

It is the most commonly sung song for English-speakers on New Year’s Eve, popularised by band leader Guy Lombardo in New York in the mid 1920s, who first heard it sung by immigrant Scots in London, Ontario. It became a New Year tradition and is familiar across the world.