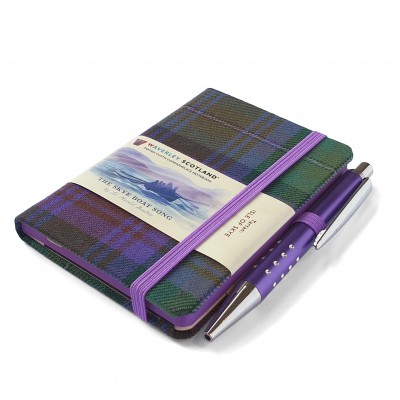 “The Skye Boat Song” is a Scottish song recalling the journey of Bonnie Prince Charlie from Uist to the Isle of Skye as he evaded capture by Government troops after his defeat at the Battle of Culloden in 1746.
The lyrics were composed by Sir Harold Boulton, in the 1870s, to an air collected by Anne Campbell MacLeod.

The text of Boulton’s song gives an account of how, with the aid of Flora MacDonald, Bonnie Prince Charlie, disguised as a serving maid, escaped in a small boat after the defeat at Culloden. The song was composed nearly a century and a half after the episode it describes. It is often supposed that it describes Charles’s flight from the mainland, but this is unhistorical. The only time Charles was in Skye was when he left Benbecula in the Outer Hebrides to avoid the increasingly thorough Government searches.

Our notebook is bound in genuine Isle of Skye tartan, woven in Great Britain.