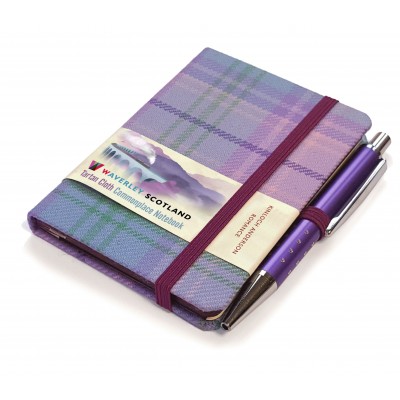 Kinloch Anderson has created its own exclusive range of tartans which are available to all. They are based on the sett of the Clan Anderson tartan. The name Anderson means son of Andrew and Kinloch means head of the loch. Romanticism in Scotland was an artistic, literary, musical and intellectual movement that developed between the late 18th and early 19th century. The Romance Tartan introduces some pastel colours which create an unusually gentle tartan identity. The soft shades of pink, sky blue, light green and purple evoke notions of floral sweetness, open skies, windswept fields and noble enchantment.

About the notebook: This notebook is made with cloth woven in mills in the United Kingdom. Notebook pages and paper components are made with acid-free paper from sustainable forests. Boards used in the binding process are made of 100% recycled paper. This hardback notebook is bound in genuine British tartan cloth with an elastic closure, ribbon market, eight perforated end leaves and expandable inner note holder. It contains a removable booklet about the history of clan tartans, and a bookmark that gives information on the Romance tartan. Each includes a matching retractable pen. (Pen barrel colour may vary from that illustrated.)