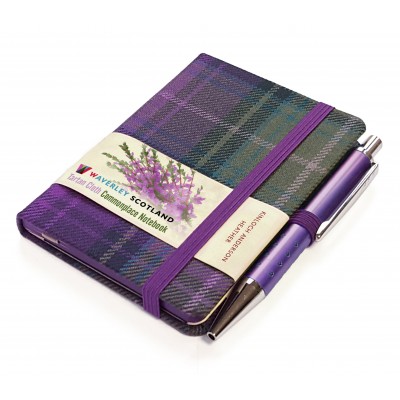 The Heather Tartan Mini notebook with pen (10.5 cm x 7.5cm, hardback, with 176 pages) is named after one of Scotland's best known native plants. The tartan introduces a special mixture of two colors of purple heather. These heathers feature in the Scottish landscape in autumn. They are blended with three shades of green and soft gray of Scotland's hills.

This series of Tartan Notebooks celebrates Scottish Traditions. It is a land of history, clans and tartans. The landscape of Scotland has hills, glens, mountains, lochs and rivers. There are many castles and strongholds of Scotland, some ancient and ruined. Each one is full of history, with a story to tell.

Kinloch Anderson has created its own exclusive range of tartans which are available to all. They are based on the sett of the Clan Anderson tartan. The name Anderson means son of Andrew and Kinloch means head of the loch.

Waverley Books has published two books about Kinloch Anderson, A Scottish Tradition and Tailored For Scotland .

About the notebook: This notebook is made with cloth woven in mills in the United Kingdom. Notebook pages and paper components are made with 80gsm acid-free paper from sustainable forests. Boards used in the binding process are made of 100% recycled paper.This hardback notebook is bound in genuine British tartan cloth with an elastic closure, ribbon market, eight perforated end leaves and expandable inner note holder. It contains a removable booklet about the history of clan tartans, and a bookmark that gives information on the tartan. The notebook comes with a pen. (Pen barrel colour may vary from that illustrated.)