'A Summer of Surprises' and 'An Unexpected Affair' by Jan Ellis 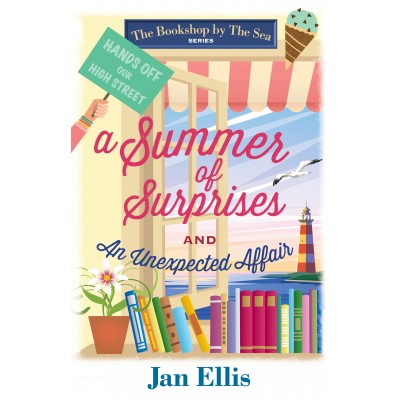 'A Summer of Surprises' and 'An Unexpected Affair' by Jan Ellis

After her divorce, Eleanor Mace decides to begin a new life running a quirky bookshop in a quiet corner of Devon. She adores her seaside home, and her bookshop – The Reading Room – is a hit, and yet Eleanor is still unsettled … Her grown-up twins don’t need her, her recent divorce has left her at a loose end, and her subsequent move from London, in search of something new has led her to… pretty much the same old life but with sea air. So Eleanor goes online and rediscovers an old flame. Impetuous and impulsive, but with her sister for protection, Eleanor sets off to the South of France in search of a man she last saw in her twenties. But will Eleanor find happiness on the Continent or does itlie in rural England?

woman), a go-for-it sister, and love interest on both sides of the Channel, this gently humorous story is both entertaining and wry.

'A Summer of Surprises'

The story continues two years after the end of 'An Unexpected Affair'. Eleanor and Daniel have been dating for nearly two years and there are plans afoot to celebrate their unofficial anniversary. Everything is rosy until Freya, Daniel’s ex-wife, suddenly gets in touch to announce that she is on her way from London to see him – and to meet a top-secret client
who has extravagant plans.
Meanwhile, rumours are circulating of a theme park about to be built in Combemouth that will threaten the beauty of the Devon coast – and business at Eleanor’s bookshop. Things take a turn for the worst when Eleanor discovers that architect Freya and the new development are closely connected. Furious when it seems that Daniel has sided with his
ex-wife, Eleanor decides to take a stand and rallies the whole town to protest against the plans. The story comes to a happy conclusion, but not before a trip to Spain and a surprising discovery that launches Eleanor into the spotlight.

About Jan Ellis: Jan Ellis began writing fiction by accident in 2013. Until then she had worked in publishing, and as an editor and historian of early modern Spain. She fell into fiction when a digital publisher approached her to write a history book, then made the mistake of mentioning women's fiction, which sounded more fun. Jan's stories have small-town settings with realistic characters who range in age from young teens to eighty-somethings. She is somewhat surprised to find herself a member of the Romantic Novelists' Association.

Jan Ellis writes : 'I had a blast chatting to @adam_crowther at @BBCUpload about all kinds of things, including how your characters can sometimes have surprising hidden lives! Listen to the show from the beginning or scroll to about 16:50 for my bit. https://www.bbc.co.uk/sounds/play/p09f2t10