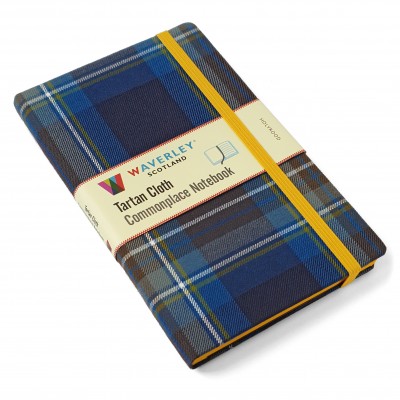 The Waverley Holyrood large notebook is hardback, 21 x 13cm, with 192 pages of 80gsm, FSC acid-free paper bound in Holyrood tartan. The Holyrood tartan is a blend of blues, greys and brown fretted with yellow.

Holyrood is an area in Edinburgh, where Holyrood Palace (also called the Palace of Holyroodhouse), the ruins of Holyrood Abbey, Holyrood Park and the Scottish Parliament are situated. Holyrood Palace is the Queen’s official Scottish residence and it is located in the Canongate area at the foot of the Royal Mile, the street so named because it runs for one mile between Holyrood Palace and Edinburgh Castle. The site was originally of a monastery founded by King David I of Scotland in 1128. He chose this spot on which to build it because he is said to have seen a haily ruid (anglicised to 'holy rood'), meaning holy cross, in the sky over this location. Here, many of the kings of Scotland were crowned, married or buried. The Palace itself was built in 1498, then severely damaged in 1544 by the Earl of Hertford’s troops and again a century later by Cromwell’s army and restored in the 1670s by Sir William Bruce on the orders of Charles II.