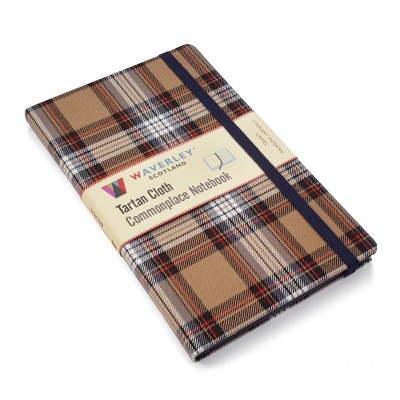 The Stewart Modern Camel tartan featured on this large format notebook is predominantly light brown in colour, with white black and red, and has a light and contemporary feel to it.

And the other day, someone called us and accidentally referred to the notebook as 'Stewart Modern Handsome' - no disrespect to camels, but they were right. It is handsome! It is one of over 30 tartans associated with Clan Stewart. The differences incorporate different branches, different areas of origin and further variations using labels such as “dress” and “hunting”. The name Stewart reflects the Clan’s illustrious origins. The original family name, from Brittany, had been fitz Alan. Walter fitz Alan (1110–1177) was High Steward of Scotland during the reign of David I (1124–1153). The name Stewart is derived from the title of that office, and Walter (d. 1246), 3rd High Steward of Scotland took Stewart as the family surname.

About this notebook: This large notebook is made with genuine tartan cloth woven in mills in the United Kingdom. Notebook pages and paper components are made with 80 gsm acid-free paper from sustainable forests. Boards used in the binding process are made of 100% recycled paper. This hardback notebook is bound in genuine British tartan cloth with an elastic closure, ribbon marker, eight perforated end leaves and expandable inner note holder. It contains a removable booklet about the history of clan tartans in 9 languages, and a bookmark that gives information on the Stewart Modern Camel tartan.


Kinloch Anderson: The tartan cloth is supplied by and produced with the authority of Kinloch Anderson Scotland, holders of Royal Warrants of Appointment as Tailors and Kiltmakers to HM The Queen, HRH The Duke of Edinburgh and HRH The Prince of Wales.