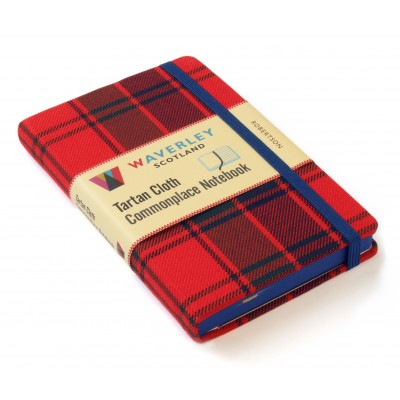 The Robertson tartan is an intense red crossed with broad bands of navy and dark green.

Clan Robertson, the Gaelic Clann DhÒnchaidh, “children of Duncan”, claims descent from Duncan I, King of Scots (who ruled 1034–1040). Donnachadh Reamhar (Duncan the Stout – stout-hearted rather than “fat”) son of Andrew of Atholl, was the first recognised chief of the clan in the early 14th century, and his family were known as Duncanson.

Duncan’s relatives and followers are said to have supported Robert the Bruce at the Battle of Bannockburn (1314). Duncan is said to have been killed at the Battle of Neville’s Cross (1346), and was succeeded by his eldest son Robert. The Robert from whom the clan takes its name though, is Robert Riabach (“Grizzled”) who in 1437 captured the murderers of King James I. As a reward, King James II gave Robert a charter in which all of his lands were made into a feudal barony. The barony in Perthshire was called Struan and the chiefs of the clan were from then onwards known as Robertson of Struan. Afterwards, the clan remained faithful to the Stewart Earls of Atholl. The Robertsons fought under Montrose for Charles I. Alexander Robertson, 17th of Struan (c. 1669–1749), is said to have led 600 clansmen to join Bonnie Dundee (John Graham of Claverhouse, c. 16481689) at the Battle of Killiecrankie (1689), but arrived too late. He fought in the 1715 and 1745 Jacobite Rebellions.

The clan’s most precious relic, carried by all Robertson chiefs since the battle of Bannockburn, is the Clach na Brataich, a clear stone that was unearthed when the chief’s standard pole was pulled out of the ground while on the march to the battle. The clan’s motto is Virtutis gloria merces, “Glory is the reward of valour”.

About the notebook: This notebook is made with cloth woven in mills in the United Kingdom. Notebook pages and paper components are made with 80 gsm acid-free paper from sustainable forests. Boards used in the binding process are made of 100% recycled paper. This hardback notebook is bound in genuine British tartan cloth with an elastic closure, ribbon market, eight perforated end leaves and expandable inner note holder. It contains a removable booklet about the history of clan tartans, and a bookmark that gives information on the Robertson tartan.