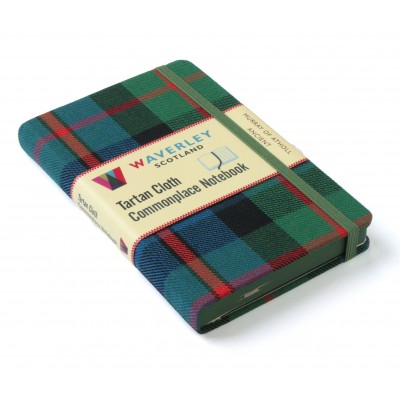 The Murray of Atholl Ancient tartan is soft blend of black, blue and green, with contrasting red lines.

It is said that the Murrays are descended from Freskin, a Pictish noble who lived in the time of David I (12th century). Freskin’s grandson William assumed the designation of “de Moravia” reflecting his ownership of land in the area of Moray. The Murrays of Tullibardine, progenitors of the Dukes of Atholl and the chiefs of the Clan Murray of Atholl, are descended from one of William de Moravia’s sons.

John Murray, the 2nd Marquess of Atholl (1660–1724) became 1st Duke of Atholl in 1703. The Duke of Atholl is the hereditary chief of Clan Murray. The Duke gathered 4,000 men in an attempt to oppose the Union of 1707. He did not support the Jacobite Rebellions, but his elder son William Murray, Marquess of Tullibardine (1689–1746) and his younger son Lord George Murray (1694–1760) fought for Charles Edward Stuart in the Jacobite army.

The Duke of Atholl’s traditional residence is Blair Castle, though the castle was left to a charitable trust in 1996 by the 10th Duke. The Duke of Atholl has a private regiment, The Atholl Highlanders, recognised by law but with no military role.

About the notebook: This notebook is made with cloth woven in mills in the United Kingdom. Notebook pages and paper components are made with 80 gsm acid-free paper from sustainable forests. Boards used in the binding process are made of 100% recycled paper. This hardback notebook is bound in genuine British tartan cloth with an elastic closure, ribbon market, eight perforated end leaves and expandable inner note holder. It contains a removable booklet about the history of clan tartans, and a bookmark that gives information on the Murray of Atholl Ancient tartan.