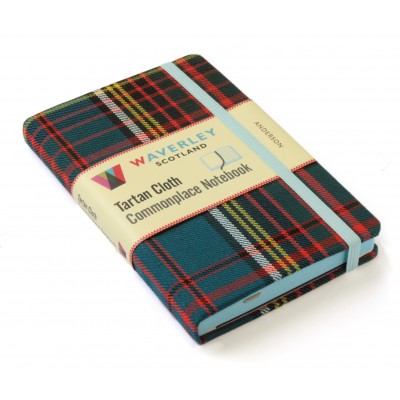 The Anderson tartan’s predominant colour is a cool mid blue, and is crossed with red, yellow, black and white.

The names Anderson and MacAndrew are connected with St Andrew. The popularity of the first name Andrew and the associated patronymic surnames meaning “son of Andrew” – with MacAndrew used in the Highlands, and Anderson in the Lowlands – means their use is very widespread, and so no exact origin of the names has been established. Gillanders, the Scottish Gaelic form, has the meaning “servant of Andrew”.

Whilst there is no specific geographical area that is a source of the Anderson clan, the Kinrara Manuscript written by Lachlan Mackintosh of Kinrara in 1679 (and based on three earlier, manuscripts written between 1497 and 1575) contains the claim that MacAndrews came to Badenoch from Moidart c. 1400.

Alexander Anderson (1582–1620), born in Aberdeen, was an accomplished mathematician, and published works on geometry and algebra. His cousin David Anderson of Finshaugh (or Finzeach, d. 1629) is most famous for removing a large rock obstructing the entrance to Aberdeen harbour in 1610. For this, and other practical talents, he earned the nickname Davie-Do-a-Things. John Anderson (1726–1796) was Professor of Natural History at Glasgow University. In 1863 William Anderson (1805–1866) published a biographical history of the people of Scotland, The Scottish Nation. John Anderson, Viscount Waverley (1882–1958) was a member of Churchill’s cabinet and commissioned the design of the Anderson Shelter, which saved many lives during the Second World War.

The motto of the Clan Anderson is “Stand Sure” and the crest includes an oak tree.

About the notebook: This notebook is made with cloth woven in mills in the United Kingdom. Notebook pages and paper components are made with acid-free 80gsm paper from sustainable forests. Boards used in the binding process are made of 100% recycled paper. This hardback notebook is bound in genuine British tartan cloth with an elastic closure, ribbon market, eight perforated end leaves and expandable inner note holder. It contains a removable booklet about the history of clan tartans, and a bookmark that gives information on the Anderson tartan.

Left side blank, right side lined.