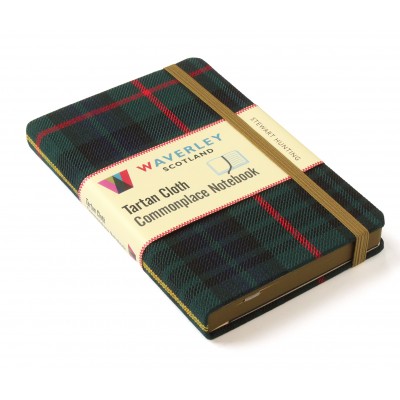 Stewart Hunting Pocket Notebook Hardback 14cm x 9cm with pocket, 176 pages and pocket. With a leaflet printed with a clan map of Scotland, and history of tartan.

The Stewart Hunting tartan is a dark blend of greens, blues and blacks with thin highlights of yellow and red.

The name of this illustrious and royal family is spelled two ways – Stewart and Stuart – but it was not spelled Stuart until the time of Mary, Queen of Scots. Mary, betrothed at the age of five to the Dauphin, Francis II of France, spent 13 years at the French Court. To enable her French associates to pronounce the Stewart name more easily it was decided to respell it without the troublesome “w”.

“Hunting” tartans can be dated back to the 16th century. Clans who wore bright colours had the idea of making them more sombre and serviceable for everyday or hunting wear, replacing a prominent colour in the main tartan with a dark colour, but retaining the arrangement of the stripes so that they still showed the clan pattern.

There are over 30 tartans associated with the Stewart clan. The differences incorporate different branches of the clan, different areas of origin and further variations using the labels “dress” and “hunting”. Royal Stewart tartan is dominated by a vibrant red, Stewart of Appin has lighter greens and blues and the Fraser Stewart of Atholl tartan is mostly red with blocks of blue, green and purple. The Stewart Hunting tartan is a variation on the Stewart tartan but is predominantly green and black with overchecks of red, yellow and blue.

In 1848, Queen Victoria and her husband Prince Albert bought Balmoral Castle. Prince Albert took care of interior decoration, where he used red Royal Stewart and the green Stewart Hunting tartan for carpets, and Dress Stewart for curtains and upholstery.

About the notebook: This notebook is made with cloth woven in mills in the United Kingdom. Notebook pages and paper components are made with 80 gsm acid-free paper from sustainable forests. Boards used in the binding process are made of 100% recycled paper. This hardback notebook is bound in genuine British tartan cloth with an elastic closure, ribbon market, eight perforated end leaves and expandable inner note holder. It contains a removable booklet about the history of clan tartans, and a bookmark that gives information on the Stewart Hunting tartan.

The tartan cloth is supplied by and produced with the authority of Kinloch Anderson Scotland, holders of Royal Warrants of Appointment as Tailors and Kiltmakers to HM The Queen, HRH The Duke of Edinburgh and HRH The Prince of Wales.