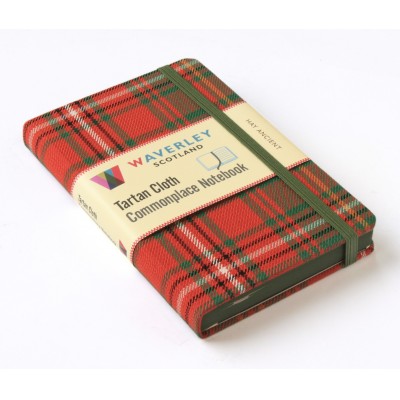 The Hay Ancient tartan is predominantly red with muted greens and accents of white, black and yellow.
The Hay Ancient Tartan has colors of red with muted greens and white, black and yellow.
The Hays are of Norman descent. Their name is derived from the barony of La Haye du Puits. The history of the Hays in Scotland begins with William de Haya. He was a cup-bearer at the court of Malcolm IV in 1160. It is believed that de Haya was descended from one of the Norman princes who travelled to England with William the Conqueror. In 1178 it was either he or his son, another William, who was granted the lands of Errol in Perthshire by King William the Lion. William de Haya married a Celtic heiress called Eva of Pitmilly.

The northeast of Scotland is Hay country. The family are also to be found in Perthshire, the Scottish Borders and Shetland. The Gaelic form of the name is MacGaradh.

Sir Gilbert Hay, fifth Lord of Errol, was a companion-in-arms to Robert the Bruce. He was rewarded with lands at Slains in Aberdeenshire and the office of Lord High Constable of Scotland. Since 1314, this title has been hereditary. All the chiefs of the clan have enjoyed a rank second only to the monarchy in Scotland.

The Hays retained a close bond with their native France. Sir Gilbert Hay, ancestor of the Hays of Delgatie, fought for Joan of Arc in the 15th century. 150 years later the Hays formed part of the Catholic forces that defeated the government army at Glenlivet. Slains Castle, the seat of the earls of Errol, was destroyed by James VI in retaliation. The Hays were staunch supporters of the Jacobite cause, and in the uprising of 1746 the ruins of Slains Castle became a focus of Jacobite intrigues. Today these ruins can still be seen, while the castle later built by the Hays, also called Slains, is said to have inspired the castle in Bram Stoker’s Dracula.

About the notebook: This notebook is made with cloth woven in mills in the United Kingdom. Notebook pages and paper components are made with 80 gsm acid-free paper from sustainable forests. Boards used in the binding process are made of 100% recycled paper. This hardback notebook is bound in genuine British tartan cloth with an elastic closure, ribbon market, eight perforated end leaves and expandable inner note holder. It contains a removable booklet about the history of clan tartans, and a bookmark that gives information on the Hay Ancient tartan.