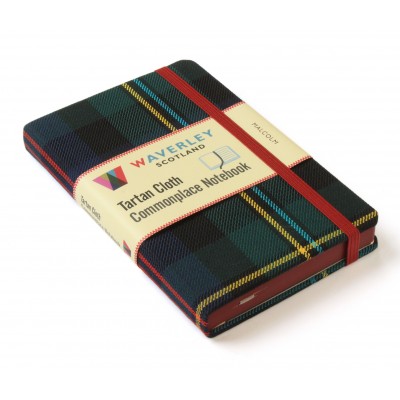 The clans Malcolm and MacCallum are joined. The names sound alike and have similar derivations, depending on which history you read. Although some historians suggest they are related, others are of the opinion that they are not genealogically linked at all. In 1779, the chief of the Clan MacCallum, Dugald MacCallum, the ninth of Poltalloch, adopted the name Malcolm after inheriting the Malcolm estate, and the two clans were joined together under the same chief.

The name Malcolm has the privilege of being the first name of four of Scotland’s kings and comes from the Early Gaelic words Mael Coluimb meaning monk of Saint Columba (521–597), the Irish Abbot and missionary credited with spreading Christianity around what is now Scotland. (Mael literally means shavenhead.) MacCallum comes from the Gaelic MacChaluim meaning the son of Callum, while some say MacCallum is derived from Mac Ghille Chaluim which means “son of the disciple of Columba”.

Whatever story you believe, there is a distinct tartan for each name, and the families are from distinct areas of Scotland. The MacCallums were based in Lorne in Argyll, and Malcolm is recorded in use as a surname around the 14th century in Dunbartonshire and Stirlingshire. Some Malcolms also settled in Dumfriesshire, and Major-General Sir John Malcolm (1769–1833) has a memorial near the border of Carlisle and Langholme.

The tartan used to bind this notebook is the Malcolm, confirmed by Sir John Malcolm of Balbeadie, 7th Baronet (1828–1865), in the 1850 book The Authenticated Tartans of the Clans and Families of Scotland.

About the notebook: This notebook is made with cloth woven in mills in the United Kingdom. Notebook pages and paper components are made with 80 gsm acid-free paper from sustainable forests. Boards used in the binding process are made of 100% recycled paper. This hardback notebook is bound in genuine British tartan cloth with an elastic closure, ribbon market, eight perforated end leaves and expandable inner note holder. It contains a removable booklet about the history of clan tartans, and a bookmark that gives information on the Malcolm tartan.