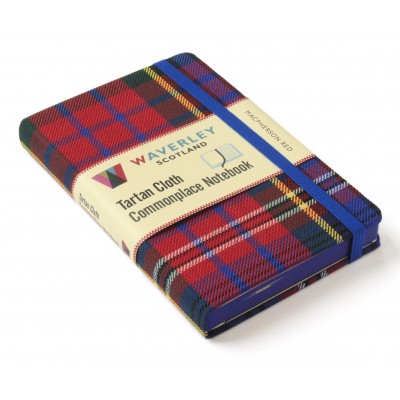 The MacPherson Red tartan is a warm blend of reds and blues which is crossed with black, green, bright yellow and white.

The Scottish Gaelic for MacPherson, Mac a’ Phersein, means “son of the parson”. The Celtic church allowed priests to marry, and as an occupational name, you’ll find families with the name throughout Scotland. As a clan, the progenitor of the chiefs of Clan MacPherson is believed to have been a man named Muriach (or Muireach) Cattenach who was the parson of Kingussie in Badenoch. MacPhersons originated in Lochaber, though they were given lands in Badenoch – now the district of Badenoch and Strathspey in the Scottish Highlands – by Robert the Bruce as reward for defeating the Comyns (or Cummings) who were Bruce’s bitter enemies.

MacPhersons are said to have been the early chiefs of Clan Chattan – which is a confederation of several clans – in the 12th century before that clan came under Mackintosh leadership. The Clan Chattan is sometimes referred to as the “Clan of the cats” because many of its constituent clans have a wild cat in their clan badge. The MacPherson clan motto is “Touch not the cat but a glove”, meaning “Don’t touch the cat without gloves”.

There is an annual Clan Gathering held at Newtonmore every August and there is also a Clan Museum in that town. The home of the current Chief, Sir William Alan MacPherson of Cluny and Blairgowrie, is Newton Castle, Blairgowrie.

About the notebook: This notebook is made with cloth woven in mills in the United Kingdom. Notebook pages and paper components are made with acid-free paper from sustainable forests. Boards used in the binding process are made of 100% recycled paper. This hardback notebook is bound in genuine British tartan cloth with an elastic closure, ribbon market, eight perforated end leaves and expandable inner note holder. It contains a removable booklet about the history of clan tartans, and a bookmark that gives information on the MacPherson Red tartan.