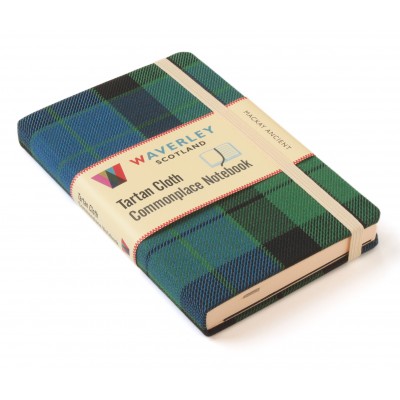 The MacKay Ancient tartan is a blend of cool blues and greens interlaced with bands of black.

This ancient clan, originally known as Clan Morgan and the Clan Aoidh, occupied lands in Durness, from the northwest peninsula of Cape Wrath, extending eastward to the border of Caithness and south to the northern edge of Sutherland.

The MacKays are believed to be descendants of the Royal House of Moray, one of the seven Celtic earldoms. Iye Mac Eth (c. 1208–68), the progenitor of the clan, was Chamberlain to the Bishop of Caithness. His son, Iye Mór, acquired the Durness lands through marriage to the bishop’s daughter in 1263.

In the 15th century Angus Dubh (d. 1433), the 7th chief, stood against Donald, Lord of the Isles, when the latter invaded Sutherland in his attempt to assert his claim to the Ross earldom. The invaders were victorious, and Angus was imprisoned until Donald’s defeat at the battle of Harlaw in 1411 forced a reconciliation. Angus later married Donald’s sister, Elizabeth, thereby acquiring further lands. In 1427 it was documented that Angus was the leader of a force of 4,000 men, a reflection of how much power he had accumulated.

From the 16th century, the MacKays’ influence began to wane as their lands came under constant attack from the Gordon clan, who had acquired the earldom of Sutherland by force and sought to extend their territory. By the end of the century, the MacKay chief had become reduced to the status of vassal to the Gordon chief.

The clan suffered in the 19th-century Highland Clearances and in 1829 the chief sold what remained of their lands to the house of Sutherland.

About the notebook: This notebook is made with cloth woven in mills in the United Kingdom. Notebook pages and paper components are made with acid-free paper from sustainable forests. Boards used in the binding process are made of 100% recycled paper. This hardback notebook is bound in genuine British tartan cloth with an elastic closure, ribbon market, eight perforated end leaves and expandable inner note holder. It contains a removable booklet about the history of clan tartans, and a bookmark that gives information on the MacKay Ancient tartan.