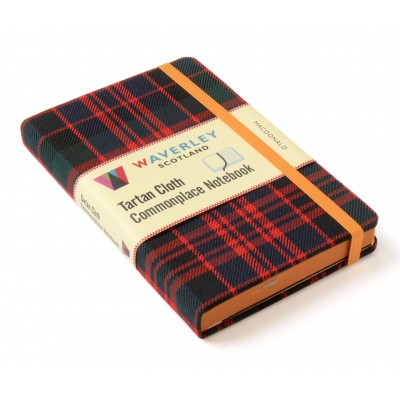 The MacDonald tartan bears a lattice of bright red over a dark background of blue and green.

If your surname is MacDonald then you belong to the Clan Donald. There are several branches of the clan with origins all around the Highlands of Scotland: including Islay, Glen Garry near Fort William, Lochaber, Glen Coe in the north of Argyll, and Ardnamurchan on the west coast. The branches of Clan Donald were determined by the different lands granted to the descendants of Donald of Islay. Their main stronghold was Loch Finlaggan on Islay where they held their court.

The Clan Donald is the largest of the Highland Clans and is often described as the most powerful. The Clan Donald was descended from Donald, grandson of the heroic Somerled, Lord of the Isles (d. 1164). Donald’s grandson, Angus Og (d. 1330), was granted vast lands in the Highlands and Western Isles by Robert the Bruce, whom he had supported in the fight for Scottish independence.

The name MacDonald is, of course, at the centre of one of the most famous stories in Scottish history, the Massacre of Glencoe of 1692, in which 38 clan members were slaughtered by a Highland regiment under the command of Robert Campbell of Glenlyon (1630–96), on the orders of John Dalrymple, Secretary of State for Scotland (1648–1707).

There are at least 27 different tartan setts associated with the Clan Donald. Their motto is Per mare per terras, “by sea and by land”.

About the notebook: This notebook is made with cloth woven in mills in the United Kingdom. Notebook pages and paper components are made with 80 gsm acid-free paper from sustainable forests. Boards used in the binding process are made of 100% recycled paper. This hardback notebook is bound in genuine British tartan cloth with an elastic closure, ribbon market, eight perforated end leaves and expandable inner note holder. It contains a removable booklet about the history of clan tartans, and a bookmark that gives information on the MacDonald tartan.