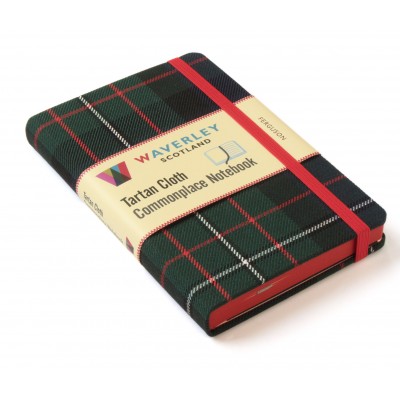 The Ferguson tartan is a dark forest green with thin white and red accents.

Ferguson means “son of Fergus”. In Gaelic, MacFhaerghuis, or the anglicised MacFergus, can also be translated as “son of the angry one”. There are Fergusons (or Fergussons) all over Scotland, and though it is not possible to ascribe one common ancestry to a patronymic name of this type, the clan’s history contains several stories of the origins of Fergusons in different areas of Scotland. There were branches of the clan all over Scotland, from Dumfriesshire through Argyll and Perthshire to Aberdeenshire and Ross-shire. These had separate chiefs, though the chief of the Fergussons of Kilkerran in Ayrshire has been recognised since the 18th century as the chief of all the Fergusons.

The clan’s own history claims that the Fergusons of Strachur in Argyll can be traced back to Fergus Mór mac Eirc, who led his people, the “Scoti”, from Antrim in Ireland to settle in Argyll and establish the ancient tribal kingdom of Dalriada (Dál Riata), a Gaelic overkingdom that included parts of western Scotland and northeastern Ulster in Ireland in the 5th and 6th centuries.

Records link the Fergusons of Dumfriesshire and Ayrshire with Fergus of Galloway (d. 1161) who was founder of Dundrennan Abbey. He was: father of Gilbert, or Gilla Brigte mac Fergusa, of Galloway (d. 1185); grandfather of Duncan, or Donnchadh, Earl of Carrick (d. 1250); and great-great-grandfather to Robert Bruce (1274–1329). This branch of the clan appears to have held estates in Kilkerran from medieval times, and they remain the principal clan family. Another important branch are the Fergusons of Dunfallandy in Atholl, who were recognised as the principal Highland family of the clan.

About the notebook: This notebook is made with cloth woven in mills in the United Kingdom. Notebook pages and paper components are made with acid-free 80gsm paper from sustainable forests. Boards used in the binding process are made of 100% recycled paper. This hardback notebook is bound in genuine British tartan cloth with an elastic closure, ribbon market, eight perforated end leaves and expandable inner note holder. It contains a removable booklet about the history of clan tartans, and a bookmark that gives information on the Ferguson tartan.