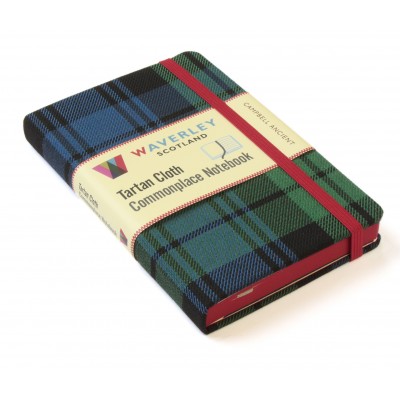 The Campbell Ancient tartan’s palette is restful blues and greens overset with bands of black.
176 pages.

The Campbell Ancient tartan's colors are restful blues and greens with black bands.

Clan Campbell was the most powerful clan in the southern Highlands of Scotland. Tradition has it that the clan is descended from Diarmid who was a Celtic mythological hero. That is why Clan Campbell is known as the “Race of Diarmid”. Historically, their ancestors were almost certainly from the ancient kingdom of Dalriada (or Dál Riata ). They were probably a family of high rank. Their name in Gaelic is Caimbuel, which translates as “wry or crooked mouth”.

In common with many of the Scottish clans, the Campbells were keen to extend their territories and their power. The degree to which they achieved this aim was due, in part, to their willingness to cooperate with the Lowland Scotland power base.

At the height of their power they held extensive lands throughout Argyll, in Perthshire, Ayrshire, Inverness-shire and on the islands of Mull and Islay. With the Lords of the Isles disempowered and dispossessed by James IV, the authority of the Campbell chief in the southern Highlands became almost regal. The powerful clan chiefs inspired both loyalty and courage in their kinsmen. By the mid-18th century it was estimated that the Campbell strength stood at 5,000 men.

The principal branch of the clan is that of Argyll, which was created a dukedom in 1701. Other important branches are those of Cawdor, Breadalbane and Loudoun which have their own tartans. The Campbell Ancient tartan has the same sett as the Black Watch but it uses lighter shades of blue and green. The Black Watch was raised by the Duke of Argyll in 1739 and served by members of the clan.

About the notebook: This notebook is made with cloth woven in mills in the United Kingdom. Notebook pages and paper components are made with 80gsm acid-free paper from sustainable forests. Boards used in the binding process are made of 100% recycled paper.This hardback notebook is bound in genuine British tartan cloth with an elastic closure, ribbon marker, eight perforated end leaves and expandable inner note holder. It contains a removable booklet about the history of clan tartans, and a bookmark that gives information on the tartan.