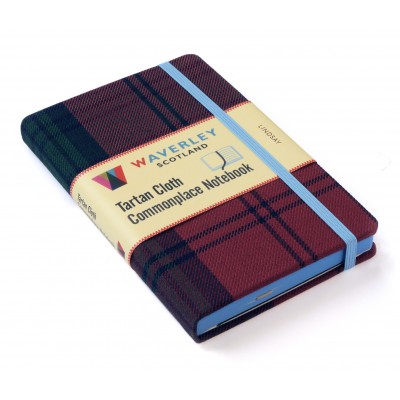 The Lindsay tartan is made up of a deep burgundy and navy with a subtle green overlaid.

It is thought the name Lindsay is taken from the area of Lincoln in east England, and Lindsay was one of the lesser kingdoms around 450ad. The name is recorded also for a Norman, Baldric de Lindsay. Sir Walter de Lindesey was one of many Norman knights who accompanied King David I on his return to Scotland in 1124.

Two generations later, the Lindsays held lands at Crawford in Lanarkshire. Through marriage of another Sir William Lindsay to a Northumbrian heiress, they gained great wealth. Sir William’s son David (d. 1214) married into the Scottish Royal Family, and another Sir David, became Lord High Chamberlain in 1256.

The Lindsays supported William Wallace and Robert the Bruce during the Wars of Independence, and Sir David Lindsay, Lord of Crawford, was one of the nobles who signed the 1320 Declaration of Arbroath, the document sent to the Pope that asserted Scotland’s independence. Another Sir David Lindsay, who became the 1st Earl of Crawford in 1398, was particularly distinguished. In 1390 he fought before Richard II of England in a famous tournament on London Bridge where his skill and courage earned him the admiration of the English king.

Sir David Lindsay of the Mount, in Fife was an attendant of James V and served as Lord Lyon, King of Arms but is best remembered as the author of Ane Satyre of the Thrie Estaitis, a play that satirises the corruption within the Church and the State. First performed in 1540, it gained the royal approval of James V and is still performed today. Edzell Castle near Brechin, seat of the Earls of Crawford, although now a ruin, is renowned for its beautiful garden and summer house.

Septs: Related septs of the clan include: Crawford, Deuchar

About the notebook: This notebook is made with cloth woven in mills in the United Kingdom. Notebook pages and paper components are made with 80gsm acid-free paper from sustainable forests. Boards used in the binding process are made of 100% recycled paper. This hardback notebook is bound in genuine British tartan cloth with an elastic closure, ribbon market, eight perforated end leaves and expandable inner note holder. It contains a removable booklet about the history of clan tartans, and a bookmark that gives information on the Lindsay tartan.