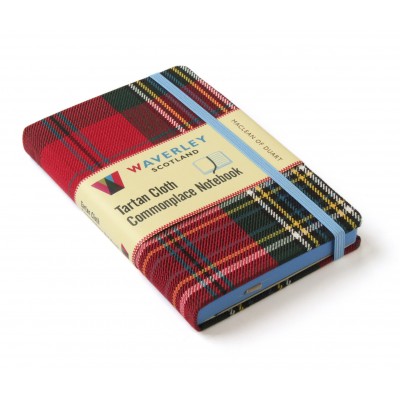 The Maclean of Duart tartan is a rich blend of reds and dark green fretted with pale blue, yellow and white.

The Macleans claim descent from Gillean of the Battleaxe, a kinsman of Fergus Mor, the sixth-century ruler of the ancient kingdom of Dalriada. The progenitor of the clan was Lachlan Lubanach who lived in the late 14th century. Lachlan was married to the daughter of the 1st Lord of the Isles and from him received lands in Mull. Mull is an island located off the west coast of Scotland. Lachlan is recorded as being the first Maclean to occupy Duart Castle, the ancient stronghold of the Maclean chiefs.

At the end of the 15th century, James IV (1473–1513) successfully challenged the power and independence of the Gaelic clans, and in 1493 Lachlan Maclean was stripped of his lands and titles. The Macleans, who had supported the monarch, received royal confirmation of their possessions and titles, which now included lands in Tiree, Jura, Islay, Morvern and Lochaber.

During the 16th century the Campbells emerged as the most powerful clan in the West Highlands. Several marriages took place between the Macleans and the Campbells, but the match between Lachlan Maclean and the daughter of the 2nd Earl of Argyll proved disastrous. Lachlan despised his wife so much that he marooned her on a rock in the Sound of Mull and left her to drown, before reporting her death to her family. However, the lady was rescued by fishermen and returned to her clan, and her brother stabbed Lachlan to death in revenge for his cruelty.

Duart Castle fell to the Hanoverians during the 1745 Jacobite Rebellion and was unoccupied until 1911, when it was repurchased and renovated by the clan chief.

About the notebook: This notebook is made with cloth woven in mills in the United Kingdom. Notebook pages and paper components are made with acid-free paper from sustainable forests. Boards used in the binding process are made of 100% recycled paper. This hardback notebook is bound in genuine British tartan cloth with an elastic closure, ribbon market, eight perforated end leaves and expandable inner note holder. It contains a removable booklet about the history of clan tartans, and a bookmark that gives information on the Maclean of Duart tartan.