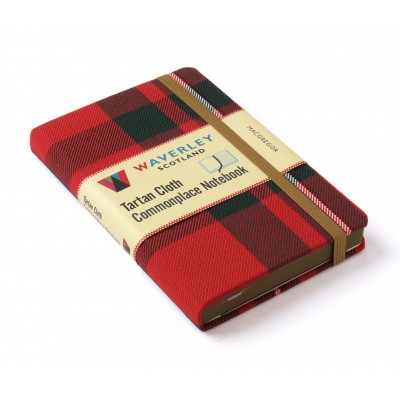 The MacGregor tartan is an intense red with broad bands of blacks and a single white highlight.

The clan motto ’S rioghal mo dhream, “Royal is my race”, reflects the MacGregors claim that they are descended from Gregor, a descendant of Kenneth Macalpin, 1st King of Scots (810–858ad).

They first occupied substantial lands in Glen Orchy, Glen Strae and Glen Lochy but much of their property passed into the possession of the Campbells in the 14th century. Confined to Glen Strae, they held their lands by the sword, fighting bravely for their homes, and gave their enemies such a good excuse to urge their dispossession that their name was sternly suppressed by Parliament.

In the 16th century, Gregor Roy, the chief of the clan, became dispossessed of his lands after Campbell of Glenorchy refused to recognise their claim. Gregor Roy and his kinsmen were forced to turn outlaw in order to survive, raiding cattle and sheltering from their enemies in the glens. In 1603 the MacGregors overthrew their oppressors, the Colquhouns of Luss, at Glen Fruin. For this they were proscribed, and their chief, Alistair MacGregor, with many of his followers, was executed in Edinburgh in 1604. For the next 140 years the MacGregors suffered severe persecution. Forced to disperse and seek shelter with other clans, many of them changed their names. The laws against the clan were repealed in 1744 and shortly afterwards General John Murray, a descendant of the House of Glen Strae, was declared the MacGregor chief.

Rob Roy MacGregor of Glengyle was the legendary freebooter whose exploits were immortalised in Sir Walter Scott’s romantic novel Rob Roy. There is a different tartan commemorating him.

About the notebook: This notebook is made with cloth woven in mills in the United Kingdom. Notebook pages and paper components are made with 80 gsm acid-free paper from sustainable forests. Boards used in the binding process are made of 100% recycled paper. This hardback notebook is bound in genuine British tartan cloth with an elastic closure, ribbon market, eight perforated end leaves and expandable inner note holder. It contains a removable booklet about the history of clan tartans, and a bookmark that gives information on the MacGregor tartan.