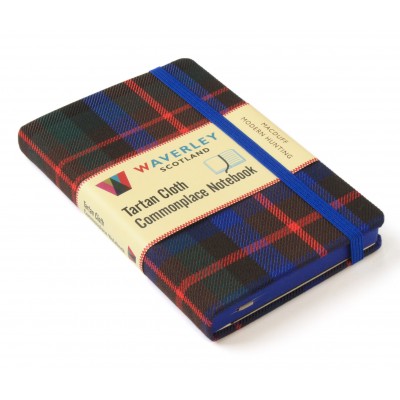 The Macduff Modern Hunting tartan’s blue glows out against a background of dark browns and hints of green, shot through with bold reds.

Before the clan system was fully recognised, the MacDuff Earls of Fife were the greatest family in Scotland. MacDuff, 1st Earl of Fife, was held to be the Earl of Fife who opposed Macbeth (1040–1057) and assisted Malcolm to the throne of Scotland. The centre of MacDuff power was the kingdom of Fife, and they held extensive lands in the northeast and in the Lowlands. The MacDuffs held the ancient privilege of crowning the kings of Scotland on the ancient Stone of Scone, the right to bear the red lion rampant of the royal house, and the right to lead the front rank of the Scottish army. They could also claim the right of reprieve for the crime of murder, for a modest payment, or the right of sanctuary at the Cross of MacDuff near Newburgh, Fife.

Clan Duff claims to be of the original Royal Scoto-Pictish line. The line ended in 1353 with the death of Duncan IV, and the Earldom of Fife was passed to the House of Stewart in 1371. In 1759 the earldom of Fife returned to the Duff family when William Duff, Lord Braco (1697–1763) received the title Earl Fife in the Peerage of Ireland. In 1733 he bought a settlement called Doune on the Moray Firth that in 1783 became known as MacDuff. He bought Duff House, Banff (designed by William Adam) though he never lived in it. His son James, 2nd Earl Fife (1729–1809) completed the building of the house. In the 1817, James, 4th Earl Fife (1776–1857), renamed the town of Mortlach in Moray as Dufftown.

The MacDuff tartan, above, is the “hunting” version of their clan tartan, modern colours. Hunting tartans replace the most prominent colour in the main tartan with darker colours like green and blue.

About the notebook: This notebook is made with cloth woven in mills in the United Kingdom. Notebook pages and paper components are made with 80gsm acid-free paper from sustainable forests. Boards used in the binding process are made of 100% recycled paper. This hardback notebook is bound in genuine British tartan cloth with an elastic closure, ribbon market, eight perforated end leaves and expandable inner note holder. It contains a removable booklet about the history of clan tartans, and a bookmark that gives information on the Macduff Modern Hunting tartan.